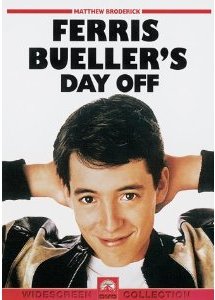 Let’s take a trip back to a time when even adults recognized righteous dudes, principals went on one man missions to ruin students, you could convince your friend to borrow his dad’s prize Ferrari for a road trip, and Jennifer Grey, Charlie Sheen, Ben Stein, Alan Ruck, and Kristy Swanson were unknowns.  Let’s all take our own day off and watch this movie.
I saw Ferris Bueller’s Day Off during its original run in the movie theaters.  I may have laughed harder at this movie than any other I have ever seen.  The whole theater audience was gasping for breath in places.  It is even funny right up to the very last scene after the closing credits have finished.  If it weren’t for a stretch in the second half where they try to turn serious for a while and impart a Life Lesson, I would have this movie rated at five stars.  That sequence just felt out of place with the rest of the movie, and it was immediately apparent that it bogged the movie down when they then shifted back into high gear for Ferris’ race to get home.
The premise of the movie is that the most popular kid in school decides that a particular Spring day is just too nice to waste by going to school.  He convinces his parents he is sick, but he doesn’t fool his sister (Jennifer Grey.)  He also doesn’t fool the principal of his school.  He knows that Ferris must be faking and he sets out to catch him in his lie.
Ferris gets his girlfriend out of school, and he convinces his best friend Cameron (Alan Ruck) to join them on a trip into .  The best part is that he convinces his friend to let them use his dad’s prize Ferrari for the day.  They don’t raise hell like you might expect, though.  They go to a Cubs game.  They go to an art museum.  They eat at a fancy restaurant.  They go to a parade.
All the while this is going on the principal is trying to uncover where Ferris is.  He goes to Ferris’ house and has some encounters with both their dog and Ferris’ sister.
Watch for early appearances by Kristy Swanson as a student explaining what she had heard about why Ferris was out of school, and by Charlie Sheen as a young punk that the sister encounters in a police station.
This movie also made a personality out of Ben Stein.  At the time he had earned an Economics Degree from , a Law Degree from Yale, and had been a speechwriter for Presidents Nixon and Ford.  Despite all of those accomplishments, he will always be remembered most for this movie.  He was the teacher that was taking attendance and discovered that Ferris was absent.  His “Bueller?.....Bueller?......Bueller?” quote was named one of the most famous movie quotes of all time.  It has become synonymous with someone asking a question and getting no response – a “Bueller moment.”
He capitalized on his very dry presentation and delivery by appearing in a number of commercials, movies, and TV shows, all playing a similar character to the one in this movie.  He eventually had his own game show – Win Ben Stein’s Money.  Unfortunately, in recent years he’s gone off the deep end, writing and hosting a documentary that claimed, among other things, that belief in evolution is bad because it’s what led the Nazis to kill Jews and conduct the atrocities of the Holocaust.
Some other fun facts related to the movie:
The actor and actress who played Ferris’ parents ended up falling in love and getting married in real life, and Matthew Broderick and Jennifer Grey were dating while they played brother and sister in this movie and they later became engaged to be married.
The 90s band Save Ferris took their name from a joke in this movie where the community is rallying to save Ferris from what rumor says is a life threatening illness.  They would appear in the movie 10 Things I Hate About You (1999) and the TV show .  They had a song titled Let Me In that was put to great use in ’s ninth episode of the first season.  Check it out.
During the parade sequence musical number they show clips of some people such as a window washer and a construction worker also dancing along to the music.  They were not hired for the movie.  They were just real people who got caught up in the music, the director noticed them, and he had his cameraman capture them on film.
The glass house with all the great cars in it, which is owned by Cameron’s family, is for sale in real life.  It’s been on the market for quite a while, but with the depressed real estate market there have been few people interested in it.  If you’ve got some spare change it can be yours for less than two million dollars (cars sold separately.)
On a final note, if you want to play with your head some watch this movie and the movie Election (1999) as a double feature.  In Election Broderick plays a teacher who has a run in with a student, played by Reese Witherspoon.  It’s Witherspoon’s best performance to date, her Oscar for Walk the Line notwithstanding.  I’ll be reviewing Election in a later post, as well as 10 Things I Hate About You.
Chip’s Rating: 4 out of 5 stars