Book – AWOL on the Appalachian Trail 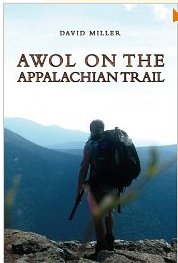 This book is the story of a through-hike of the by David Miller.  In 2003 he quit his job as an engineer to hike the trail.  Many hikers go by “trail names” while they are hiking, not unlike people on the internet choosing names for themselves.  Because his company would not allow him to take a leave of absence, he took the name “AWOL”, as in “absent without leave.”
I’ve read other accounts of hiking the trail, but this book is the real deal.  Unlike the author of A Walk in the Woods, for instance, David Miller actually hiked the entire trail, not just half of it.  He also did the 2,172 miles in a relatively short four and a half months.  The man put some serious miles behind himself each day.  Like most through-hikers he went from south to north, starting at in and ending on the top of Katahdin in .
His style of writing allows the story to flow without awkward pauses or long tangents.  It is mostly absent any long philosophical musings, or other hiking stereotypes.  He talks frankly about dealing with injuries, animals, other hikers, and the absence from his family.  He includes many photos he took along the way.  My favorite is one he took of a man who was hiking with his cat.  In the photo the cat is simply perched on top of the man’s pack.  The cat became something of a legend for catching all kinds of mice that liked to hang around the shelters on the trail.
The book is divided into fourteen chapters; each chapter being a section of the trail.  In the last chapter he is in and has some very favorable things to say about the state.  He has an Introduction talking about his decision to hike, as well as an Epilogue that tells a little bit about what happened afterwards.  He also lists a website you can go to when you are done with the book, if you want to see more photos.
Overall, this book functions as an outdoor adventure story for the person who will never set foot on the trail, as well as an excellent account of what to expect for the person who is seriously thinking of attempting the hike.