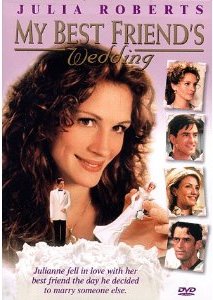 Julia Roberts in a romantic comedy; (yawn) it’s been done.  Julia Roberts realizing she has feelings for someone close to her; (yawn) it’s been done.  Julia Roberts playing a potential home wrecker and a “bad guy” even though she’s the star of the movie; wait a minute, what did you just say?
The premise of the movie is that Julia Roberts finds out that her best friend, played by Dermot Mulroney, is going to be getting married.  She’s going to lose him and feels horrible about it.  She figures out that she has loved him all this time and never knew it.  Despite the advice of another friend, played by Rupert Everett, she heads off to break up the wedding and tell her best friend that she loves him.
My Best Friend’s Wedding let Julia Roberts play a character that we had seen before, but put in a situation where she’s not necessarily doing the right thing.  Audiences loved her, so it was interesting to watch people’s reaction to this role.  Would they still like her even though she is trying to break up the wedding of her best friend?  Would they root for her to succeed?  I think that audiences were pretty evenly split.
The fiancé is played by Cameron Diaz.  She had been in several movies, but this was the first time she got to be on screen with a true A-list comedic actress like Julia Roberts.  She more than held her own with Roberts and it led to Diaz getting the lead role in the comedy There’s Something About Mary, which put her in the A-list herself.
I had never seen Rupert Everett prior to this film (although I have since seen Cemetery Man, a truly strange film he made early in his career.)  In My Best Friend's Wedding he steals every single scene he is in.  He is the best thing about the movie, actually.  It’s him telling a long story about how he met Julia Roberts’ character that finally ends with a punch line that leads to most of the cast singing I’ll Say a Little Prayer for You.  That is my favorite scene in the movie.  It’s ’s scenes that kick this movie up to four stars for me.  Unfortunately, was not really able to capitalize on his new found fame in the American market.  He has worked continuously since this movie, but he never enjoyed the success that Cameron Diaz did.
By the way, if you haven’t seen this movie, but it sounds really familiar, that’s because Patrick Dempsey did a very similar movie titled Made of Honor in 2008.  He’s the one realizing he loves his best friend when she asks him to be her Maid of Honor at her wedding.
Chip’s Rating: 4 out of 5 stars