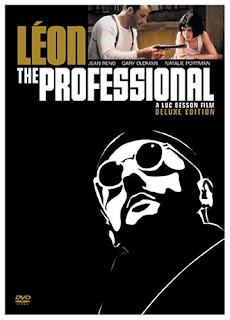 The Professional features the screen debut of Natalie Portman.  It’s immediately apparent that she is destined for big things.  She is almost preternaturally mature in this role.  She acted opposite Jean Reno, who also became a star because of this movie.  You may not recognize his name, but you will recognize his face.  He became the go to actor whenever needed a Frenchman in their movie (i.e. Godzilla, Mission Impossible, The Da Vinci Code, etc.)

The premise is that a girl (Natalie Portman) suffers the death of the rest of her family at the hands of a corrupt DEA agent (Gary Oldman chewing the scenery.)  Her character has the presence of mind to keep it together long enough to beg the loner down the hall to let her in to his apartment and save her life.  It turns out the reason he is a loner is that he is a professional hitman who keeps a very low profile.

At first she makes him uncomfortable on multiple levels.  She is invading his space.  She is disrupting his routine.  He is detached emotionally and does not know how to relate to anyone, let alone a girl.  And since this was produced by the French they did not shy away from a scene where he is made very uncomfortable by her burgeoning sexuality.  He gets by all of that, though, and what develops is an unlikely bond, part mentor/mentee, part father/daughter.  Eventually, Portman tries to convince him to train her, so that she can get revenge against the corrupt agent.  The hitman is reluctant, to say the least.  His bond with her is now to the point where he cannot refuse her, though.  It is this bond that ultimately raises this movie far above the run of the mill action movie.

There are multiple titles to the movie, and multiple versions of it.  It was originally titled in and it had a longer running time.  The American version was released as The Professional and had about 25 minutes cut out of it.  The scenes that were cut were primarily ones where Portman’s character accompanies ’s character on a couple of hits.  The producers felt they would be too controversial in .  The movie was so well-liked, though, that they eventually released the “International” version in the as : the Professional.

I have seen both versions and I would recommend the complete one.  While both are very good movies, the complete one adds a little more depth to the relationship between the two main characters.

The level of violence in the movie is such that you would not want to show it to children.  This is a movie for the grown-ups.