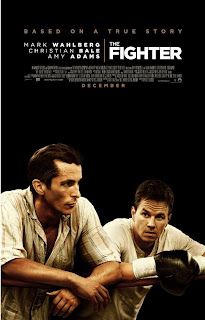 The Fighter was nominated for seven Oscars, including acting nominations for Christian Bale, Melissa Leo and Amy Adams, all in Supporting roles.  The lead actor, Mark Wahlberg, did not get a nomination, though.  I have an opinion on why that happened and I’ll discuss it in my review.
sports fans are already familiar with the story of “Irish” Micky Ward, a boxer from .  I know not everyone follows sports, though, so I will not assume that you already know what’s going to happen before you have seen the movie.  That means I will try to avoid spoilers for the movie.
Micky Ward has a half-brother, Dicky Eklund (Christian Bale), who was a somewhat successful boxer in his own right.  He even had a title fight with Sugar Ray Leonard in the late 70s and went the distance.  When the movie opens in the early 90s, though, he is a drug addict.  He is the trainer for his brother Micky and an HBO camera crew is following him around “to document my comeback” as he tells everybody.
Micky is managed by his and Dicky’s mother, Alice (Melissa Leo).  There is also Micky’s father, seven sisters, and an ex-wife and daughter that make up his family.  He starts dating a bartender (Amy Adams), who his family doesn’t like.  His career isn’t going much of anyplace and that’s because of his family.
The reason that Bale, Leo, and all got Oscar nominations is that they have the big, showy roles that Oscar voters love.  Bale is the crack addict clinging to the past and using his brother.  Leo is one of the least likable mothers ever put on film as she dotes on the addict Dicky and uses Micky to his detriment.  is the new girlfriend who tries to make Micky realize that he would be better off without his family.
The reason Wahlberg did not get nominated is that his role is the quiet one.  He is the ping pong ball that gets batted around among these people fighting over what they want him to do.  He is very loyal to his family, so even though he knows in his heart that they are bad for them, he can’t leave them.  He loves his girlfriend and he doesn’t want to lose her, either.  It’s not until after more than half the film is over before Wahlberg finally gets a scene where he confronts his brother.

Lots of times it is playing the quiet character that is the hardest, yet doesn’t get rewarded because they are obscured by the more showy performances around them.  I feel that this is one of those cases.  Don’t get me wrong; I think that Bale, Leo, and all deserved their nominations.  I just think that Wahlberg deserved one, too.
If you do know the story of Micky Ward then be aware that they changed several things about it.  They moved events and conflicts around in order to try to create more of a “Rocky” feel to the movie.
The movie did a fantastic job in capturing the realities of Lowell – an economically depressed old mill town – as well as the lower income, white trash family of Micky Ward.  Some people felt that the way the mother and sisters were presented was too unrealistic.  I’ve actually known families like this one (not my own, thankfully.)  I found their presentation to be very realistic.
There are some boxing scenes, but they are a small part of the film.  Think Rocky, not Rocky IV.  Please don’t avoid this movie just because you care nothing or know nothing about boxing.  It is first and foremost a movie about family and the difficult choices you sometimes have to make in order to improve.
The movie is currently in theaters.  The release dates for the DVD and Blu-ray have not been announced yet, but they are available for pre-order.
Chip’s Rating: 4 out of 5 stars