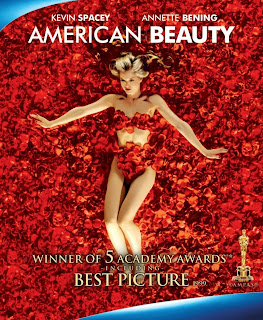 American Beauty won five Oscars, including four of the five major ones, capped off by Best Picture.  It only missed for Best Actress.  Annette Bening was beaten by Hilary Swank’s performance in Boys Don’t Cry.  Unlike most Oscar winning movies, which are very dramatic and heavy, this movie had enough humor in it to be called a comedy/drama.

The movie revolves around two families.  One is a father (Kevin Spacey), his wife (Annette Bening), and their daughter (Thora Birch.)  The other is a new family that moved in across the street: father (Chris Cooper), mother (Allison Janney), and son (Wes Bentley.)  The other major character is the daughter’s friend (Mena Suvari.)

Spacey’s character is the narrator.  He is run down by life.  He’s in a dead end job.  His wife is having an affair.  His daughter is a distant teenager who won’t talk to him.  At a school function he sees his daughter’s friend performing a dance routine and becomes infatuated with her, to his daughter’s dismay, and to the friend’s amusement.  He decides to change his life.  He quits his job, starts working out, and starts getting high.

His pot supplier is the son across the street.  The son is a dark loner who seems to have a lot going on inside – making him absolutely fascinating to the daughter.  The father across the street is a tough disciplinarian and the mother tries to ignore the problems between her husband and son by anesthetizing herself with alcohol.

The movie is about the various connections these people make with each other, with a little more being revealed about them each time, up until the event that results in Spacey’s character’s death.  At the beginning of the movie he told you he will be dead in a year.  What he didn’t tell you was how it happened or who did it.  The more you learn about the characters, the more you realize it might have been any of them.  Don’t worry; you do get shown “whodunit”, so it’s not the kind of movie that leaves you hanging.

Some of the humor comes from Bening’s character’s reaction to her husband quitting his job, taking a job at a fast food joint, buying a sports car, etc.  She is also put out because it makes it harder for her to carry on her affair, which also provides some humorous scenes.  There is also humor in Spacey’s character’s infatuation.  It is played as funny and a little pathetic, not as skeevy.

The younger cast, even though they were not as well known, was given just as much praise as the older cast.  The movie does a great job of presenting things from both parents’ and teenagers’ points of view, without making either two dimensional or a parody.

The combination of drama, comedy, and mystery is a great one.  Unless you hate all three of those, you should like this film.