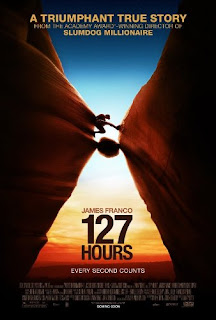 The title of this movie refers to the amount of time a hiker (James Franco) is trapped by a boulder crushing his arm.  This is a true story from a few years ago and the events were all over the news.  The movie is based on the hiker’s (Aron Ralston) book Between a Rock and a Hard Place.  I am going to assume you remember what he had to do to get free, so I am going to discuss it in the review.  Unless you’ve been under a rock (hah) and don’t know what happens, then be aware that there is a spoiler for that in this review.
In a bit of a strange coincidence there are four Best Picture nominees this year that are based on true events - The King’s Speech, The Social Network, The Fighter, and 127 Hours.  Of the four, this movie’s story changed the least.  Aron Ralston has been asked how close the movie is to what he actually went through and he has said that it is practically a documentary, just done with an actor playing him.  The other three movies had to change things in order to create more interesting stories or challenges to overcome.  127 Hours was already such a riveting story that it didn’t have to do that.
Here is why I felt the need to discuss what he did to get free – there have been news reports of the impact it has had on some of the people who have seen the movie.  After realizing that no one was ever going to find him, and after exhausting every other way he could try to get free, he finally cut his own arm off with nothing more than a pocket knife.  This scene goes on for a minute or two in the movie.  While any movie in the new “torture porn” genre (i.e. Hostel) shows far more graphic scenes of bodily harm, it is the concept of what he is doing that I think gets to people.  I cringed once while watching it.
James Franco’s performance also adds bite to this scene.  He pretty much is the movie and his nomination was well-deserved.  The movie is only an hour and a half, so for the most part it wasn’t boring.  They show the five days passing with him having to deal with various problems.  He also ends up hallucinating during part of it.  It is these hallucinations, as well as his memories, that allow them to bring a few more people into the movie.  Other than a couple of female hikers he meets before his accident, he is alone with his thoughts.
I remember hearing the news story and wondering how someone gets themselves into a position like that, and why no one would have ever found him if he hadn’t freed himself.  The movie answers both of those.  He was an idiot who disregarded the basic safety rules all hikers should follow, like letting someone know where you are going.  The movie also does a great job of showing the small canyon he is trapped in and just how vast the open area around it is.  You know for sure that no hope is coming.
The Original Song nomination this film received is for a song that just plays over the end credits and didn’t impress me very much.  There was much better use of music during the film.  It’s strange that the movie got a nomination for Best Original Score, though.  There was a movie a few years ago (Into the Wild) that had a great score, but was disqualified because they actually had the temerity to put a couple songs into the movie, too.  Can you imagine the gall of them offending the Academy like that?  (rolls eyes.)
The movie is currently in theaters.  If you are squeamish you may want to wait for the movie to come to DVD, so that you can skip over the arm cutting scene.  The release dates for the DVD and Blu-ray have not been announced, but they are available for pre-order.
Chip’s Rating: 4 out of 5 stars