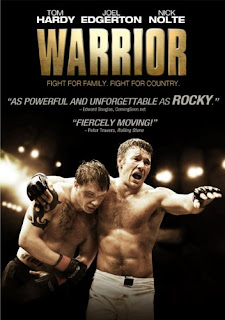 I’ve seen Warrior called a modern day Rocky.  While I think that’s not completely accurate, I can certainly see why people would compare the two.  Rocky focuses on an underdog in boxing, while Warrior focuses on a couple of underdogs in the world of Mixed Martial Arts (MMA) fighting.  Even though the film does not have any real big surprises in it, it still is very entertaining.  I have never watched an MMA bout in my life, but I found myself still drawn into the lives of these two men because of their backstories.  This is what raises this film above a generic B-movie about fighting.
Australian actor Joel Edgerton (Owen Lars in Star Wars Episode III) and British actor Tom Hardy (Inception) play a couple of brothers from .  Edgerton plays the older brother Brendan and Hardy plays the younger brother Tommy.  The two have not seen each other for more than ten years, ever since their mother took Tommy with her when she fled their alcoholic father (Nick Nolte).  Brendan stayed with his father because he thought he could save him.  He couldn’t.  Brendan and his father are now estranged.  Even though he has finally been sober for 1,000 days he hasn’t been allowed to visit the grandchildren that Brendan has had with his wife (House M.D.’s Jennifer Morrison).  Brendan had a short journeyman career in MMA fighting before settling down and becoming a physics teacher at a high school.
One day Tommy walks back into his father’s life.  If anything, he hates his father even more than Brendan does.  He won’t tell his father anything about where he has been or what he has been doing.  The father is just happy to have him around at all, so he doesn’t ask any questions.  Tommy had been a state champion wrestler trained by his father before his mother took him away.
He goes back to the local gym and while there agrees to be a sparring partner for an MMA fighter who is preparing for an upcoming winner-take-all sixteen fighter tournament.  Tommy just destroys this guy in nothing flat.  A video of it gets uploaded to Youtube and a Marine in recognizes Tommy as a man who saved his life then disappeared.  This new notoriety gains Tommy a spot in the 16 man tournament.  He finds himself having to go back to his old trainer, his father, to prepare.  We haven’t found out Tommy’s whole story at this point, though.
Meanwhile Brendan and his wife cannot keep up with their mortgage.  He takes a small purse fight in a parking lot to get some quick money.  As bad luck would have it, he is recognized by someone from his school and the principal is forced by the School Board to suspend him without pay.  Even though his wife hates the idea of her husband, and the father of her children, possibly getting injured or even killed, he has no other choice but to get back into MMA fighting to make some money.  He searches out his old trainer, who takes him back on.  As good luck would have it, this trainer has one of the fighters in the 16 man tournament, but he gets injured, so Brendan takes his place.  If he can win this tournament he can save his house.
Gee, I wonder if these two estranged brothers will end up fighting each other for the championship?  Well, was there any chance Daniel wasn’t going to face Johnny in the final match of The Karate Kid (1984)?  Even if the trailer for Warrior hadn’t already shown this to us, it’s pretty much a given.  It's how they get there that makes the movie so good.
Nick Nolte got a well-deserved nomination for Best Supporting Actor for his performance in this film.  The role was written specifically for him and even though the studio didn’t want Nolte, the filmmakers held out and got what they wanted.  The result is a great performance on Nolte’s part.  I’ve now seen three of the nominated Best Supporting Actor performances and Nolte’s is my favorite so far.
You may be an MMA fan and are wondering how realistic the fighting is.  Well, they hired a number of real fighters to play smaller parts in the film.  Both Edgerton (torn MCL) and Hardy (broken finger, toe, and ribs) certainly gave their all making the fights look as real as possible.  Hardy definitely bulked up from his appearance in Inception.  In fact, I kept trying to figure out who he reminded me of.  It finally dawned on me that with the muscular face and short hair he kind of looked like Vin Diesel.
One thing Warrior’s fights do have in common with Rocky’s is that they would have been stopped much sooner in real life (“Cut me Mick!”).  As great a shape as Edgerton and Hardy got in, I think the fittest person in the cast was Jennifer Morrison.  There are a couple of scenes where I couldn’t help but notice how toned she was.
If you want a Rocky comparison I would say this film is most in the spirit of Rocky 2, which was the most crowd pleasing.  It is an unabashed story of two brothers and a father who are forced to reconnect and possibly heal old wounds – all set in the world of Mixed Martial Arts.  Unless you don’t like films about fighting, I highly recommend this film.
Chip’s Rating: 4 out of 5 stars