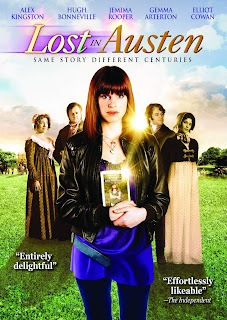 FYI – there is a movie version of Lost in Austen in the early stages of production.  Right now it is planned to come out some time in 2013.
If you have not read Pride and Prejudice, nor seen any of the adaptations, you can still watch this, but you will miss a lot of the humor.  For anyone who does know the story, I definitely recommend this.  And for anyone, especially women, who have pictured themselves in the story, I highly recommend this.  It’s a lot of fun.
Chip’s Rating: 4 out of 5 stars