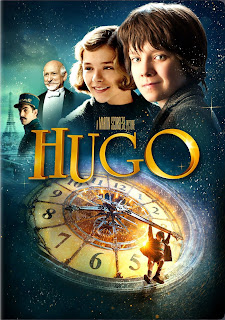 When Hugo first came out I took one of my increasingly rarer trips to a movie theater to see it.  When I got there I saw only showtimes for the 3D version.  I asked about the 2D version and was told that there were no showings for it.  I asked “what about the people who prefer 2D?”  There were a few noises of agreement from the line behind me.  The manager happened to also be behind the counter and he told me that they only had 3D so I could take it or leave it.  The stunned look on his face when I told him I would leave it, and then turned around and walked out was satisfying, but it left me having not seen the movie.  (And no, there was no movie-style scene where the whole crowd followed me out the door.  I didn’t even get the “slow clap” that gains momentum as I left, either.  Oh well.)

I did manage to find showings for the 2D version, but they were quite a ways away from me.  I figured that the film would get some Oscar nominations and when it did, it would return to theaters.  I was partially right; the first chain didn’t bring it back, but a second chain did.  Unfortunately, they simply returned the 3D version again.  In their haste to be penny wise, they ended up being pound foolish.  They didn’t stop to think that the people who would be most interested in seeing an Oscar nominated film, and the people who would be most interested in seeing a 3D extravaganza, probably do not have a lot of crossover with each other.  The result is that the chain has already removed Hugo again after only one week of low ticket sales.  You may be wondering which chains these are.  They shall remain nameless, but I will say that the first one certainly didn’t display the magic of cinema that the movie Hugo did, and that the second royally screwed themselves by expecting to earn a king’s ransom for their tickets.

This time I checked again for any 2D versions showing anywhere within an hour and a half drive time.  I finally found an old arthouse theater in downtown (that’s the one in for the west coast folks who don’t know that the city was named for the one.)  It was just under an hour to drive there, pay extra for the parking garage, and watch it in a theater that was alternately so cold I wished I had a heavier jacket, then so warm I wished I could take off more than my jacket.  And you know what?  It was completely worth it.  Hugo is a fantastic movie.

Now that you have heard my sad tale of woe, you wonder, “Should I see it with my Romeo?”  (Someone once said, “If you’re going to steal, then steal from the best.”)  The answer is yes.

Hugo stars Asa Butterfield (The Boy in the Striped Pajamas) as title character Hugo Cabret.  He is a boy living in a train station in in the 1920s.  His father (Jude Law in a cameo) died and the boy’s uncle (Ray Winstone in a cameo) took him to live with him in the train station.  The uncle’s job was to take care of all the clocks.  He taught Hugo how to do it, and then simply disappeared.  Ever since then Hugo has been supporting himself by stealing food where he can.  He has kept all the clocks running perfectly, too.

The other thing he has been doing is trying to finish repairing an automaton that his father discovered in a museum.  He and his father worked on it together, but the father died before they could finish their work.  Hugo has been stealing small parts and gears for it, and this has brought him to the attention of an elderly shop keeper in the station (Ben Kingsley).  This man, named Georges, has mechanical toys in his shop, so it naturally attracts Hugo.  One day he catches Hugo trying to steal, and after threatening to report him to the Station Inspector (Sacha Baron Cohen), he has the boy empty his pockets.  Among the items is Hugo’s notebook of his father’s drawings of the automaton.  Georges is startled by this and insists the boy must have stolen the notebook.  He says he is going to take it home and burn it.  Hugo is distraught.

Hugo follows Georges home, but cannot get the notebook.  He sees a girl about his age in the window of Georges’ home.  He gets her attention, talks to her, and she agrees to try to keep Georges from burning the notebook.  Her name is Isabelle and she is the goddaughter of Georges and his wife Jeanne.  They have raised her since her parents died.  Isabelle is played by Chloe Grace Moretz (Kick-Ass, Let Me In).

Isabelle and Hugo become friends.  She takes him to her favorite place in the world – the book store in the train station.  Its owner (Christopher Lee) allows her to borrow books.  She loves reading adventure stories, but she longs to have a real adventure of her own.  Hugo finds out she has never seen a movie in her life because Georges has refused to let her go.  Hugo shows her how to sneak into a theater – (Isabelle: “We could get into trouble.”  Hugo: “That’s how you know it’s an adventure.”)  She is thrilled by Harold Lloyd’s daring in the movie Safety Last! (1923).  Note – if you haven’t seen it, by all means do.  It is very entertaining.

Hugo finally tells her about his story, and he shows her the automaton he has been trying to repair.  It still won’t work because it needs a heart-shaped key to start it.  Guess who just happens to have one?  The automaton is designed to write on paper.  What it does write (or rather, draw) leads Hugo and Isabelle into a whole other adventure of discovery about themselves, her family, and the wonders of the cinema.

In addition to those people already mentioned, there are other familiar faces in small roles.  Harry Potter movie fans will recognize Uncle Vernon Dursley (Richard Griffiths), Madame Maxime (Frances de la Tour), and Narcissa Malfoy (Helen McCrory).  Emily Mortimer has a flower stand and her character is the unrequited love of the Station Inspector.  Also watch for the film’s director Martin Scorcese in an uncredited cameo as a photographer.  Some people, including myself, wondered if Executive Producer Johnny Depp had a quick cameo as a musician, but both he and Scorcese said that even though he wanted to appear in the film, his schedule did not allow it.

Hugo received eleven Oscar nominations – more than any other 2011 film.  These nominations include Best Picture, Best Director, and Best Adapted Screenplay.  Surprisingly, there was not one acting nomination for this film.  Ben Kingsley definitely deserved one for Best Supporting Actor.  Chloe Grace Moretz did another fine job in this film, but with the already crowded Best Supporting Actress field, I’m not surprised that she didn’t make it to the final five nominees.

Is there anything that this movie didn’t do well?  There were some small things.  The Station Inspector character was a little too cartoonish.  He was definitely in there for the kids in the audience, yet I’m not sure if kids would like this film quite as much as adults.  The second half of the movie may not keep their attention as well since it concentrates as much on Georges’ story as it does on Hugo’s.  Other than that, there were a few shots that were obviously thrown into the movie for the 3D version.  Neither of these two things are more than minor complaints for me, though.

If you like movies and want a wonderful time with your Significant Other, then seek this one out.  There are small little romantic moments in the film that are cute.  Hugo and Isabelle start to hold hands, a couple of shopkeepers try to connect despite a dog’s disapproval, the Station Inspector tries to get the nerve to approach the flower girl, Georges and Jeanne recollect their adventures when they were younger, etc.

This film is definitely a movie lover’s dream.  It celebrates all that is wonderful about movies and the effects they have on both young and old.  If you know nothing about the early days of the cinema, this film definitely shows it to you.  I loved almost every minute of this film.

I’m not sure who to warn away from this.  Perhaps if you only like big action movies with lots of death, then you should avoid seeing Hugo.  For everyone else, I give this film my highest recommendation.