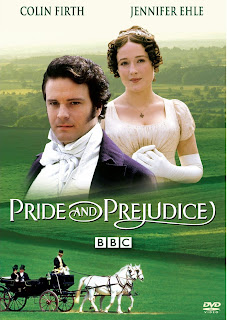 This is the version of Pride and Prejudice that I saw most recently.  I had seen the 2005 and 1940 versions earlier, and before that I had seen 2004’s Bride & Prejudice (more on that can be found in the parent post).  The 1995 version of the story is actually a six episode miniseries that aired on the BBC.  As each episode was shown, the audience grew and the result is that this is probably the adaptation that is beloved by the largest number of Jane Austen fans.
It stars Jennifer Ehle (Possession, The King’s Speech) as Elizabeth Bennett and Colin Firth (Shakespeare in Love, The King’s Speech) as Fitzwilliam Darcy.  The rest of the actresses and actor playing the Bennett family have not become well known outside The U.K.  You may recognize Anna Chancellor (The Hitchhikers Guide to the Galaxy, St. Trinian’s) as Caroline Bingley.
Even though I had never seen this version, I had heard a lot about it.  Colin Firth became a star in The U.K. because of it and this led to roles in big films (i.e. Shakespeare in Love) which made him a star in the as well.  Jennifer Ehle also became a star in her home country, but she did not have as much luck at getting the big roles as Firth did.  She has continued to work steadily, but she is more one of those actresses that general audiences recognize, but don’t know her name.  She had a decent role in the recent movie Contagion (2011), but even there the sheer number of Oscar nominees/winners in the cast may have overshadowed her.
I specifically watched this Pride and Prejudice adaptation so I could include it as part of these posts.  I received the two disks from Netflix.  Each was labeled as being 2 hours 35 minutes long, so I knew I was in for five hours of Bennetts, Darcys, and Bingleys.  This didn’t bother me at first.  I saw that there were four episodes on the first disk and I thought it was a little strange that the BBC would make episodes that were less than 40 minutes each, but I mentally shrugged and started it up.  After the first two episodes ran over 50 minutes apiece I began to worry about the length.  When the next two did the same I had already invested over three and a half hours and I had not even gotten to the second disk yet.  This was turning into a seven hour adaptation, if the second disk was similarly mislabeled.  I felt a sense of relief when I found out there were only two more episodes on the second disk.  After another hour and a half I had completed the more than five hour Pride and Prejudice marathon.
Because of the length, the filmmakers were able to go into much more detail than either the 1940 or 2005 movie adaptations.  There were characters in this miniseries that I had not seen before.  There were also scenes that fleshed out several of the minor characters in the story.  This is the advantage of length.  See Branagh’s version of Hamlet as compared to Olivier’s for instance.
The drawback of length is, well, the length.  As I mentioned in the parent post, sometimes what makes a book great is not what makes a movie great.  By the time I was in the fifth episode (about four hours in) I felt the story started to drag some.  Most of that episode seemed to consist of nothing more than various characters wondering where was and if she was okay.  Pretty much the entire 50 minutes of this episode was left out of the movie adaptations I have seen.
This fifth episode did a second thing, which was to spoil the surprise about Darcy’s involvement in what was going on.  My understanding is that the 1995 version actually added in scenes that were not in the book and these were some of the additions.  This revelation about Darcy is as much as a surprise for the book reader as it is for , but in the miniseries we see it as it is unfolding.  My assumption is that the filmmakers wanted to continue to feature Firth.  Since this section of the story does not involve Darcy to any great extent, their solution was to add in scenes of him.  Finding out about this secret when does was one of my favorite moments in the first real version I saw (2005).
I mentioned above that I had heard about this version long before I had seen it.  The one thing I kept hearing about over and over was Firth’s “wet he-shirt” scene and how women would go faint over it.  It’s been mentioned, and spoofed, and discussed in any number of other things I have seen.  One of the funnier clips was a scene shot for the Bridget Jones sequel, but not used.  It consisted of Renee Zellweger, in character as Bridget Jones, interviewing Colin Firth, who played himself.  The first joke is that Firth co-starred with her in the movies.  The second joke is that Jones is almost overcome with the fact that she gets to talk to Firth.  Her questions almost immediately go to his wet shirt scene.  He answers politely at first, but as she keeps coming back to it, ignoring his many other accomplishments, he starts to get irritated with her.  You can see this skit below.


Anyway, I was certainly curious to see what the big deal was about.  I had already seen Lost in Austen (2008), which had a very funny reference to it as well. (More on that in the Lost in Austen post).  Combine the LiA scene with the ongoing mentions of it several other places and it was probably impossible for it to live up to the hype.  After three and half hours of watching the miniseries it finally showed the scene and my impression of it was, “That’s it?”
Now as a straight male I’m obviously not the target audience for the scene, but I had still expected more.  It consists of Firth walking towards the camera for only two or three seconds with his shirt partially transparent.  The very next scene the shirt is already noticeably drier and you can no longer see through it.  A couple seconds of seeing hints of nipples spawned all this adulation?  Even if it were a desirable woman walking toward the screen with hints of her nipples showing I don’t think I would have still been thinking about it the next day, let alone talking about it years later.  I would have thought an earlier scene in the series where Firth is bathing in a tub would have made a larger impact.  Oh well.  This is not a criticism of the scene, by the way; merely an observation of my reaction to it and the fame that it has gained.
The best thing about this adaptation was that Darcy’s prejudice against ’s family was much more understandable.  I would have been hesitant to let a friend marry into them, too.  In this version they are far more embarrassing.  Many more scenes of them acting out in public are shown.  In fact, both Mrs. Bennett and middle sister Mary were pretty unlikable.  The actress playing Mrs. Bennett uses a high pitched voice for almost every line, which after four plus hours became really annoying.  The fact that the fifth episode featured her in constant worry over is another reason it was the lowest point of the adaptation for me.
Another thing that was more understandable was ’s initial dislike for Darcy.  In this version he is, to be blunt, a real prick when we first meet him.  Other adaptations treated him more as aloof.  It was almost as if the 1995 filmmakers decided they needed to moderate him after the first episode, though, because he quickly became much warmer towards .  It felt like it was sooner in the story than in other versions.
My biggest complaint with this version, other than the fifth episode, was that the marriage proposals were not shot or acted all that well.  They didn’t have the emotional impact for me that other versions had.  I watched the one hour "look back" documentary on the second disk and even the filmmakers commented that they made a mistake by having the two characters walking while the proposal was happening.  As for the acting, the supporting cast does a decent job, but nothing that I would consider to be a great performance.
Seeing this version did confuse me on a couple of things.  Two complaints I had read about the 2005 version were that Knightley was too pretty to play Elizabeth, whose older sister Jane is the real beauty, and that the American version of the film had an additional scene at the end featuring a kiss – one that Austen never had in her book.  Guess what?  The 1995 version has the same “flaws”.  Jennifer Ehle is easily the prettiest of the five actresses playing the sisters.  There is also a kiss at the end of the miniseries.  For the record, neither of these things is a negative for me.  I rather liked the kisses.
I would say that the biggest reasons to see this version of Pride and Prejudice are for the pop culture impact it has had, and for the fact that it has the time to be more faithful to the book than movie adaptations.  If you love the book, and want to see something as faithful as possible, then this is the version to pick.  If you have already seen one of the movie adaptations, and they were long enough for you, then you may want to avoid this version.
Chip’s Rating: 3 out of 5 stars