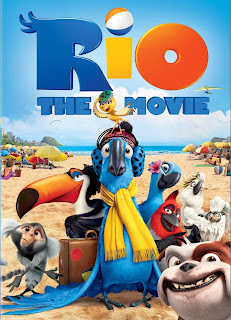 The movie is an animated film that received an Oscar nomination, but it was not for Best Animated Feature film.  It was for Best Original Song.  That song, Real in , is played at the opening and closing of the film.  You can find the video for that song here (embedding for it has been shut off so I can't include it with this post).  Its only competition is from The Muppets’ song Man or Muppet, so it has a 50/50 chance of winning the Oscar.  It is definitely the catchier of the two songs, but The Muppets have a lot of nostalgia working for them.  As for Rio, the movie is decently entertaining, with some laughs here and there, but it is aimed more at kids than adults.
Jesse Eisenberg voices the main character of Blu, a macaw taken from the jungles of as a baby and who is now the pet of a woman named Linda living in (voice of Leslie Mann).  She finds out that Blu’s species is in danger of dying out and a scientist named Tulio (voice of Rodrigo Santoro) is looking for a male to pair up with his female macaw Jewel (voice of Anne Hathaway).  Needless to say, while one love connection is trying to be made, a second one also starts.
Things aren’t looking so good at first for Blu because Jewel hates him.  She pretty much scares the crap out of him, so he’s not exactly looking to start a relationship with her, either.  Blu is basically a pre-Social Network, neurotic Jesse Eisenberg character – who happens to be a bird.  Eisenberg actually came in to do the voice work for on the weekends, while working on The Social Network (2010) during the week.
reunites Eisenberg with Hathaway and it sounded like they had fun.  They had played siblings on a TV show named Get Real more than a decade earlier.  This show is the first thing I saw either of them in.  At the time, Jesse Eisenberg was touted as the brother of Hallie Eisenberg, who had made a splash in a series of Pepsi commercials in the late 1990s.  Of course, at one time Julia Roberts was known as “Eric Roberts’ sister”, too.  Fame sure has a way of changing sometimes.
Through a series of misadventures Blu and Jewel end up in the wilds of the jungle and the streets of .  Smugglers want to capture the birds for rich collectors and they have to stay on the run to keep ahead of them.  By the way, that’s literally “on the run” because Blu never learned how to fly.  Things are even crazier because the entire city is preparing for Carnivale.  Characters that Blu and Jewel meet are voiced by Wanda Sykes, Jane Lynch, Jamie Foxx, will.i.am, Thomas F. Wilson, George Friedlander, and Tracy Morgan.
In the meantime, Linda and Tulio are also searching for their birds and they get caught up in a Carnivale parade.  Both are socially awkward and this forces them to loosen up some, especially around the opposite sex.
The animation in the film is very good, and the four main characters of Blu, Jewel, Linda, and Tulio are interesting.  Some of the supporting characters are a little annoying, but again, this is aimed more at kids than adults.  If you are still a kid at heart, then I recommend you give this film a try.
Chip’s Rating: 3 out of 5 stars
DVD                      Blu-ray                 Instant Video