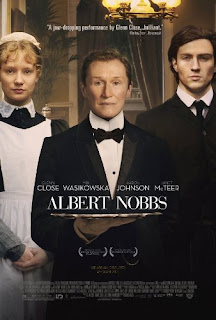 The film Albert Nobbs was nominated for three Oscars (Best Actress, Best Supporting Actress, and Best Makeup), and it has a number of familiar faces in supporting roles, but it really is Glenn Close’s movie from top to bottom.  In addition to starring as the title character, she also produced, co-wrote the screenplay, recruited a number of people for roles, and even wrote the lyrics to the song that is performed over the closing credits.  It’s obvious that this was an important story to her.  The fact that she persevered almost 30 years in getting it made also speaks volumes to her commitment to it.  The result is an interesting character study set against the backdrop of a high class hotel in late 1800s .
Note - this review discusses Janet McTeer's nomination for Best Supporting Actress.  This could be considered a mini-spoiler if you have no idea who she is, or who she plays in the film.