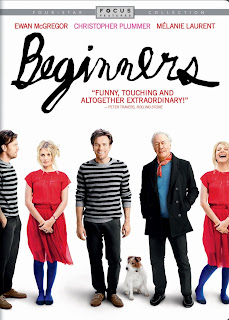 The film Beginners received an Oscar nomination for Best Supporting actor for Christopher Plummer’s performance.  He plays a man who has come out as gay very late in life.  He is also a man who is dying.  In addition, Plummer falls into the “has done good work for decades and has never won an Oscar” camp.  This is an Oscar triple-whammy and so understandably he is considered the frontrunner to win the award.  While Plummer did a very good job in Beginners, I feel that Ewan McGregor should have received a lot more notice himself for his performance as this man’s son.
McGregor plays the main character Oliver Fields.  He grew up in a home that did not have much affection between his mother Georgia (Mary Page Keller) and his father Hal (Christopher Plummer.)  This has led Oliver to a series of doomed relationships of his own since he is afraid they will turn out like his parents’.  After ’s death, Hal reveals to his son that he is gay.  He’s always known he was, but that’s not something you admitted back in the 1950s.  Hal stayed with his wife until her death, but now that she is gone, and now that he is near the end of his own life, he can finally reveal to others who he really is.
Oliver handles this situation pretty well.  He supports his father and is okay with the much younger boyfriend (Goran Visnjic) that Hal starts a relationship with, even though the boyfriend is paranoid that Oliver hates him.  Hal is soon diagnosed with terminal cancer, and decides to do as much living as he can before he goes.  He relies on his son to hide the news of his condition from his boyfriend as long as possible.
After Hal’s death, Oliver takes in his father’s dog.  The dog has separation anxiety and cannot be left alone, so Oliver takes it everywhere with him.  This brings him to the attention of Anna, a French actress (Melanie Laurent from Inglorious Basterds).  They start a tentative relationship, but she is pretty much the female version of Oliver – always afraid a relationship is going to end up hurting her, so she messes them up herself.
The movie is shown in a non-linear way.  There are scenes of Oliver as a young boy with his mother, scenes of Hal discovering his new freedom while also battling illness, and scenes of Oliver and Anna tiptoeing their way towards a real relationship, but the scenes are intermixed with each other.  Each of these three timelines does stay linear within its own framework, though.  In other words, each time we see Oliver and Anna it is further along in their story, so it’s not too confusing.
When you watch the film, if the characters seem to be quite true to life in what seems like an out of the ordinary situation, it’s because writer/director Mike Mills based it on his own life.  The same thing happened to him, with his elderly father revealing he was gay after the death of his mother.
As I said at the top, Plummer may have received the nomination, but McGregor is the one who really impressed me.  He had done good work before, of course, but in this film he really captures both aspects of his character.  The first is that of the son supporting his father and the second is that of a man struggling to find a real relationship after the death of both his parents.
I suppose if you are homophobic then you may want to avoid this film.  For everyone else, if it sounds interesting then I recommend you give it a try.
Chip’s Rating: 3 out of 5 stars