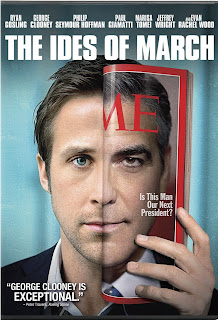 The Ides of March is a film co-adapted (with Grant Heslov) and directed by George Clooney.  They received an Oscar nomination for their screenplay.  It is based on an off-Broadway play titled Farragut North.  Clooney fought the studio, who wanted to use the name of the play for the film, too.  Thankfully, Clooney prevailed.  The title that was used is a great reference to Julius Caeser and is very fitting for the (metaphorical) backstabbing in this movie.  The Ides of March is one of my top 10 films of 2011.
This film features a stellar cast.  Ryan Gosling stars as Stephen Meyers, a rising star in the campaign of presidential candidate Mike Morris (Clooney).  Philip Seymour Hoffman plays Paul Zara, Morris’ campaign manager.  Paul Giamatti plays Tom Duffy, the campaign manager for the candidate opposing Morris in the Democratic primaries.  Marisa Tomei plays a hard-hitting reporter assigned to Morris’ campaign.  Evan Rachel Wood (Across the Universe) is a young intern on Morris’ staff, who also just happens to be the daughter of the Democratic Party Chairman (Gregory Itzin).  Jeffrey Wright (Angels in ) is a Senator whose endorsement will likely make or break Morris and his opponent.  Max Minghella (The Social Network) is a mid-level person on Morris’ campaign.  Jennifer Ehle is Morris’ wife.  I count thirteen Oscar nominations and three wins among them, not to mention some Emmys and Tonys, too.
The film takes place during the primaries.  Meyers (Gosling) is an excellent strategist for Morris’ campaign.  At one point he leaks something outrageous and completely false about their opponent.  He is told he can’t possibly prove that.  He says he doesn’t plan to; he just wants to hear the other candidate deny it.  For anyone who thinks this is unrealistic, it was lifted almost verbatim from President Lyndon Johnson.
There are hints that Morris’ opponent is working hard to get the endorsement of a key Senator who has dropped out of the race, but who has a sizable number of delegates attached to him.  If Morris gets his support instead that means all of the Senator’s delegates will now vote for Morris at the convention.  The same is true for Morris’ one remaining opponent.
Duffy (Giamatti) calls Meyers.  Whether out of curiosity or ego Meyers agrees to meet with him even though he knows he shouldn’t.  Duffy wants Meyers to come work for his candidate’s campaign.  He lets Meyers know that they are very close to getting the Senator’s endorsement because they have agreed to give the Senator a Cabinet post once elected.  Meyers brings this info back to Zara (Hoffman) and Morris.  Zara cannot believe that Meyers would talk to the opponents.  He doesn’t believe Meyers when he says that it was completely innocent.  Morris refuses to play ball with the Senator, so it is starting to look like his opponent may gain the upper hand.  Is Meyers going to be on the losing side?
Meyers is willing to do anything, if he believes in the cause.  He strongly believes in his candidate.  What if he finds something out about his candidate that starts to crack that belief, though?  What would he do then?
There is much plotting stemming from the various characters’ agendas.  All of them use someone else as pawns, but some of those pawns are also players.  To continue the chess metaphor, sometimes you have to sacrifice pieces for a better position, but if a pawn can reach the other end of the board, it can become a much more powerful piece.
Many people have praised Gosling’s work in Drive and Clooney’s work in The Descendants.  They both did do fine jobs in those movies, but I feel that their work in this film is superior to both.  I also feel that Clooney’s directing is top notch.  This is a taut political thriller that doesn’t let up.  You may feel politics is boring, and often what is shown on the news supports that feeling.  This is a behind the scenes look at what is really going on, though.
The biggest complaints I have read about the film are from people who disagree with the espoused positions of Clooney’s character on several issues.  I say that if you get into a movie enough that you can’t separate fictional characters from real politicians then the story has definitely had a strong impact on you.
By the way, the image of Gosling's and Clooney's faces being juxtaposed via a held magazine gets my vote for best movie poster of the year.
If you know nothing about the electoral process then you may be lost on a couple of points, but the main things will still be understandable.  You should still give this film a try.  For everyone else, I highly recommend this film.
Chip’s Rating: 4 out of 5 stars