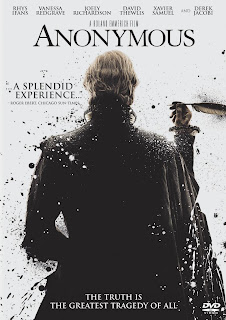 Ah, the benefits of low expectations.  I went into this film not looking for much, perhaps even cringing a little at the thought of Roland Emmerich directing a movie about Shakespeare and Queen Elizabeth I.  Emmerich, known for making a series of big budget disaster flicks (Independence Day, Godzilla 98, The Day After Tomorrow, 2012), would not be someone I would pick to do a costume drama.  And you know what?  I ended up feeling that this movie is a reasonably entertaining political thriller.  Emmerich financed the entire thing himself, so this was obviously something he had wanted to do for some time and his earnings from his prior work had finally allowed him to do it.
The central premise of the movie is that William Shakespeare did not write the plays which carry his name today.  The movie goes on to show that Edward de Vere, the Earl of Oxford, actually wrote them.  This is a real theory that has been around for decades, so the concept was not pulled out of thin air.  The fact that plays by Shakespeare continued to appear after the Earl’s death in 1604 has not stopped conspiracy theorists from talking about him.
This leads us to the biggest complaint I have seen with the movie – accuracy.  Is this film historically accurate?  No, it’s not.  Neither is Braveheart, Amadeus, Immortal Beloved, or many other films that have used real people in fictional narratives.  The best way to describe Anonymous is that it is as historically accurate as Shakespeare’s own plays about historic people.  Writer John Orloff simply takes the theory about Shakespeare/de Vere and uses it as a basis for a political thriller regarding who will succeed Queen Elizabeth I on the English throne.
Rhys Ifans, known more for comedic or quirky roles, does quite a good job as the intelligent, dignified Earl of Oxford.  In the late 1500s there is much plotting going on regarding King James I of perhaps taking over the English throne once Queen Elizabeth I dies.  She has no official royal offspring, so it leaves the succession question open.  She does have a bastard son, though, and the Earl supports him succeeding to the throne.  He cannot show this support in an overt manner, though, so he disguises it by writing a series of dramatic/comedic plays to be performed to the public with the goal of swaying popular opinion.
He brings in playwright Ben Jonson (another potential author of Shakespeare’s works to some conspiracists) and hands him a play that he wants performed under Jonson’s name.  Jonson chickens out and the play is performed as written by “Anonymous”.  It is wildly successful with the crowd and when they want the author to appear on stage, actor William Shakespeare seizes the opportunity to come out and take a bow.  As the Earl continues to secretly pass plays to Jonson, they now have to appear under the authorship of Shakespeare because this brings in the most people.
The movie Anonymous shows how these plays have characters or events that would have had special meaning to the people of the day.  Some were thinly veiled attacks on the Earl’s enemies who were trying to get the Scottish King on the English throne.  The idea is to foment a popular movement that would sweep the Earl’s candidate, Elizabeth I’s bastard son, onto the throne.
The movie shows the Earl’s relationship with the Queen both when they were younger (Jamie Campbell Bower and Joely Richardson) and when they are older (Rhys Ifans and Vanessa Redgrave.)  Redgrave and Richardson are mother and daughter, so having them play the younger and older versions of the same character is good casting.
The scenes of late 1500s are very believable.  Sets, weapons, buildings, and costumes all look authentic.  In fact, this film received an Oscar nomination for Best Costumes.
If you are a lover of Shakespeare the writer, then you may not care for the way he is portrayed in this film.  I worked with a woman who hated the film Amadeus because it had taken a hero of hers (Mozart) and made him look kind of silly.
If you enjoy Shakespeare’s plays, though, you may enjoy all the little nods to where the inspiration for them may have come from.  We also get to see several of the greatest scenes from his biggest plays performed in this film.  If any of this sounds interesting to you, then I recommend you give this movie a try.
Chip’s Rating: 3 out of 5 stars