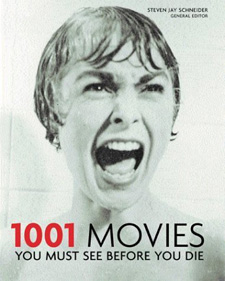 Several years ago I ran across the book 1,001 Movies You Must See Before You Die.  The title, combined with a cover featuring Janet Leigh screaming in the shower in Psycho, made me chuckle.  I flipped through the 950 page hardcover book and my immediate thought was “Wow!”  Even though it was a little more expensive than usual, I knew I had to have it.
From what I can tell, I bought the book the first year it was published (2003).  It covered movies from 1902 to 2002.  This book proved to be popular and it has spawned a number of similar titles for Books, Paintings, Comics, Music, Video Games, etc.  There have also been several more editions of the Movies book as the newest films are added each year and some older ones are removed to make room.
The book is an excellent reference for the movie lover.  It has write ups for every one of the movies, along with photos, cast/crew lists, Oscar nominations/wins, and other information.  The movies appear in the book in the order they were released.  If you do not know what year a movie came out, there is an index by the title.  There is also an index by the Director’s name.  If you are in the mood for a particular kind of movie, the films are also grouped into genres in yet another index.
I had worked off other lists of movies in order to sometimes get recommendations for what to watch.  This book was a natural for me.  Because of its price, and because the contents are heavily weighted toward “critics’ films” and not popular films, it is probably not a fitting resource for the person who watches only a couple movies a month.
Even with 1,001 entries to allow for a wide range of movies there are still some real head scratchers for the films that are not included (i.e. Inherit the Wind.)  Because the book is compiled by critics they also have to show off here and there by listing some completely obscure movie from East Snowshoe, to show just how much of a cinephile they are.  On the other hand, they also have some obvious attempts to be “cool” and show they are not just movie nerds (i.e. Top Gun).
The creation of any movie list is almost immediately followed by the crossing off of the movies that have already been seen.  In some people’s cases this is then followed by attempts to see some of the remaining movies so that even more can be crossed off.  In a few people’s cases, this is followed by a goal to see every single movie in the list, no matter how obscure it is.
I’m somewhere in the middle.  I have not made a specific effort to pick movies out of the book in order to watch more of them, but by seeing movies recommended in other places I have ended up knocking off quite a few.  I have used the book to check off those that I have watched.  I just did a count and I have seen 512 of the 1,089 movies in the list.
What’s that you ask?  What’s with the “1,089” instead of 1,001?  Well, I mentioned above that newer editions have come out and this has changed some of the movies in the list.  Since the lists are ever evolving, most people that are trying to see all of the movies just leave all the titles in their lists.  This means the total number of movies grows by a handful each year.  Keeping all the titles in the list also eliminates the frustration of having a bunch of films that you have already seen get removed, as if the effort to track them down and watch them was wasted.
I just joined a group of bloggers who write and submit reviews of selected films from this list – one film per week.  People that join are not required to do a review each week, but only to submit what they can, when they can.  The site where this takes place is named, fittingly enough, 1,001 Movies You Must See Before You Die Blog Club.  You can find it here.  It is organized and run by Squish at filmsquish.com.
In conjunction with this, look for a new Label that I will be using on my site.  It is titled “Movies – 1001 Movies”.  Any film from the list that I review will carry this Label, in addition to the normal ones for the rating, decade, category, etc.  I have gone back through all my posts and added this Label to the existing reviews that qualify.  If you are interested in seeing what those movies are, you can click on this link.
If you are a movie lover, and especially if you are a movie reviewer/blogger, then I highly recommend you pick up a copy of this book.  Yes, you can find the names of the movies in the list a number of places, including at the Club site, but the book gives you a lot more content about each and every one.  You may be hesitant to get the book when it’s going to change next year.  Well, I still have just my original copy.  I plan to buy the latest and greatest edition 10 years after this book, so in other words, 2013.  I figure that gives it time to have enough turnover in the list to be significant enough to warrant a new copy.  I recommend you do the same.

[While readying this post I just noticed that Amazon is selling the latest edition of the book, new, for almost half off the $35 cover price.  That's a hell of a deal.  I paid full price for my copy.]

Hardcover
Posted by Chip Lary at 11:14 AM