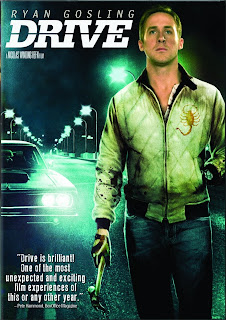 The film Drive is one that is liked by quite a few people, so they were disappointed when it received only one Oscar nomination and that it was only for Sound Editing.  The film has hit a nerve with quite a few people and that is for a good reason.  Despite the fact that it is based on James Sallis’ book of the same name, the film is actually a modern day remake of the very popular classic western Shane (1953).

Shane was well liked when it came out because of the storyline and because of what happens with the hero.  Drive does the same thing, just in a modern setting.  The main character even drives a Mustang for part of the film.

Ryan Gosling plays the Alan Ladd role of the lone man with a mysterious past.  He is never given a name in the film (another classic western reference to the “man with no name”.)  He is only referred to as “Driver” or “Kid”.  Carey Mulligan plays Irene, the Jean Arthur role of the young mother.

Driver makes a living as a stunt driver and auto mechanic by day and a getaway driver by night.  He becomes involved in the life of a young mother and her son.  Despite the fact that she is married, they obviously start to have feelings for each other.  Driver bonds with her son, too.  The father comes homes from prison, but is pressured to do another job for the bad guys.  Driver agrees to help him with it and ends up taking on all the bad guys to protect the mother and child.  People have been debating the ending of Shane for more than five decades.  Assuming there is no sequel, people will be debating the ending of Drive for quite some time, too.

Albert Brooks got good notice for his work in the film.  He’s playing a heavy by the name of Bernie Rose.  My favorite line comes when Driver first meets him.  Bernie reaches to shake hands.  Driver says, "My hands are a little dirty."  Bernie responds, "So are mine."  Also in the film are Ron Perlman (Hellboy), Bryan Cranston (Breaking Bad), and Christina Hendricks (Mad Men).

Through most of the film Driver wears a jacket with a scorpion on it.  He is the scorpion.  Despite wanting to be a better person, one that is worthy of the mother, he just can’t escape his hinted at violent nature, even though it may lead to his downfall.  This is demonstrated by a scene in an elevator that literally illustrates the term “overkill”.  FYI – someone put trivia on IMDB saying that the scorpion jacket meant Driver was the frog that was carrying the scorpion on his back.

Drive has a lot of mood to it.  If you respond to the “lone hero” type of story then you will definitely like this film.  If you are also a fan of westerns, then I definitely recommend Drive.  For everyone else, if it sounds interesting then give it a try.