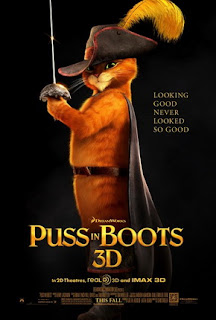 Puss in Boots is nominated for the Best Animated Feature Film Oscar, although it is unlikely to win.  This movie spins off the Puss character from the last three Shrek movies.  He is once again voiced by Antonio Banderas in a take off of his Zorro character.  The film is directed by Chris Miller, who also did the third Shrek film.  Don’t expect any of the other characters from Shrek to make an appearance, though.  Puss goes solo on this one.  I would place this movie about on par with the last couple of Shrek films – it’s got some laughs and it will entertain, but it’s not breaking any new ground.
In this film we learn about how Puss became Puss in Boots.  While trying to steal some magic beans from Jack and Jill he encounters a masked cat thief.  The two disrupt each other and Puss pursues the other cat.  He finally catches up and a battle ensues…a dance battle that is.  When the mask comes off, Puss realizes he has been fighting a female, Kitty Softpaws by name.  She is voiced by Salma Hayek, once again joining Banderas in a movie.  Just an aside – has there been a hotter onscreen duo with multiple team-ups as different characters?  Unfortunately, they are only animated cats in this one, but they do still play up the “chemistry” between them.
It turns out Kitty Softpaws was trying to steal the beans for Humpty Dumpty and this creates a problem for Puss.  He and Humpty had a falling out many years ago.  They were raised together in an orphanage and were the best of friends.  An incident caused them to stop their friendship and Puss wants nothing to do with him now.  The thing is, those beans that both cats tried to steal are the thing that both Puss and Humpty searched for all the time when they were kids.  These are magic beans that will grow a giant beanstalk that will take them to a giant’s castle in the sky.  In that castle is a goose that lays golden eggs.  Despite himself, Puss agrees to join with Humpty and Kitty to try to get those beans.
Like the Shrek films, this movie has jokes both for kids (i.e. a cat that goes “ooooooooh” when something a little naughty happens) and for adults (i.e. Puss explaining his bag of catnip is for his glaucoma).  Anyone old enough to remember the 70s should also listen for a “fine Corinthian leather” joke.  The movie Puss in Boots also has fun twisting various nursery rhymes.  For instance, Jack and Jill aren’t little kids; they are massive adults who are about as nasty as they come.
For some reason the film has a scene built just to deliver a strong anti-declawing message.  It was obviously important to the filmmakers.  They end up undermining it, though, because the whole reason Kitty is such a good thief is because of her soft paws, which are soft because she was de-clawed.
If you hated the Shrek films then you’re probably not going to like this one, either.  On the other hand, if you loved them, you will probably love this one, too.  I’m in the middle.  If you’re like me, then I recommend you give this film a try.
Chip’s Rating: 3 out of 5 stars