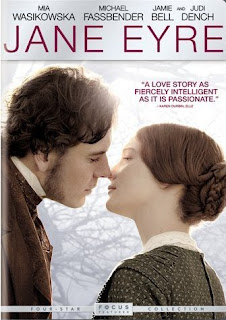 According to IMDB this is the 20th version of Jane Eyre that has been filmed.  Surprisingly, this is the first one I have ever seen.  I have not read the book it is based on, either, so I went into this almost blind.  Unfortunately, I did know what the big reveal was going to be because about 15 years ago I had seen the film Wide Sargasso Sea (1993).  It was a prequel to the Jane Eyre story and it showed and some other characters in .  Because I knew the reveal, this did probably lessen the impact of the movie on me.  Nevertheless, it is still a well-crafted film that is worth seeing.
This version of Jane Eyre stars Mia Wasikowska ( in Wonderland) as the title character and the ubiquitous Michael Fassbender (every third movie released in 2011) as .  Judi Dench, Sally Hawkins, and Jamie Bell have major supporting roles in the film as Mrs. Fairfax, Mrs. Reed, and , respectively.
The film opens with Jane fleeing a large house.  She travels on foot across the moors in the rain.  She manages to make her way to the home of St. John Rivers before collapsing.  The English rain in the 19th century was quite dangerous to women (see also Pride and Prejudice), so she falls very ill and needs to be nursed back to health by Rivers and his two sisters (Holliday Grainger and Tamzin Merchant).  When she revives she gives them a fake name.  Combined with the fleeing, she is obviously trying to put something major behind her.
While she is recovering we see flashbacks first to her youth, then to the events that she was fleeing from.  Jane was taken in by her aunt, Mrs. Reed, after her parents died.  She spent her days getting terrorized by her older male cousin and emotionally abused by her aunt.  Eventually she is shipped off to a girls’ school where she receives more abuse.  Amelia Clarkson plays the younger version of her character and does a good job in her limited time onscreen.
When Jane reaches her later teens, she accepts a job as governess to a young girl who is the ward of a man named .  Jane goes to live at his large home, but finds he spends most of his time other places.  She is greeted by Mrs. Fairfax, who is in charge of maintaining the home in his absence.  Jane gets along well with her pupil and is starting to settle in, but she keeps hearing stories about the house.  People swear a ghost walks down halls or comes into their rooms while they are asleep.
She has a bad first meeting with (he is injured when his horse is startled by her), but the two almost immediately warm to each other.  He starts spending more time at home.  Eventually they fall in love, but is hiding a large secret about his past and it may be the undoing of his and Jane’s happiness.
Wasikowska keeps turning up in Oscar nominated films ( in Wonderland, The Kids Are All Right, Albert Nobbs) and the 2011 Jane Eyre film is no exception.  It was nominated for Best Costumes.  I don’t often notice clothing, but I do have to say that the large cloak and outfit she wore at the beginning of the film as she was fleeing certainly made a big first impression.
My biggest negative with the film is that the director decided to shoot many of the outdoor scenes in shakycam, making them kind of annoying, especially when they were close-ups.  The only other thing I would mention is that the romance between Jane and seemed just a little quick to me.  Perhaps this was due to cutting scenes in order to reduce the running time.  The movie is exactly two hours long.
Those aren’t a lot of negatives, yet I find myself giving Jane Eyre only three stars, not four or five.  For whatever reason, I didn’t quite connect with the two main characters.  Both Wasikowska and Fassbender do fine jobs in their roles, and the film definitely feels like the period (sets, costumes, etc).  As I said at the top, perhaps knowing what the secret was that was hiding ended up lessening the impact the movie had on me.  Maybe I was subconsciously waiting for the movie to get to the reveal, so I wasn’t becoming as invested in the story.
In any case, if you love the Jane Eyre story then you will definitely want to see this movie.  It is a well-crafted film.  If you know absolutely nothing about the book, then the ghost story subplot might give you some decent chills and the romance might give you some decent thrills.  In either case, I recommend you give this a try.
Chip’s Rating: 3 out of 5 stars