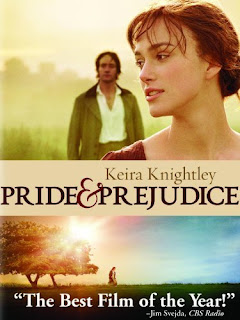 This is the first real adaptation of Pride and Prejudice that I saw.  I had seen Bride & Prejudice (2004) the year before (you can read more on that in the parent post.)  After seeing the 2005 version via rental, I went out and bought it.  I’ve watched it three more times since then, and I’ve watched some scenes from it even beyond that.  This is the adaptation that made me understand why so many people love the story.  It truly captured the romance between Elizabeth and Darcy and it is one of the best romantic dramas I have ever seen.

The Bennetts are a family with five daughters ranging in age from 15 to 21.  All of them are unmarried.  With no male heir, when Mr. Bennett dies their home will go to their cousin Mr. Collins.  Their only hope to keep their home is for one of them to marry Mr. Collins.  Failing that, they have to marry well.  A rich, single man named Mr. Bingley (Simon Woods) moves to the area.  Accompanying him are his sister Caroline and his good friend Mr. Darcy, who is also single and even richer.  They host a ball and everyone comes out to get a look at them, and to dangle their daughters in front of them.  Jane Bennet, the eldest sister, catches the eye of Mr. Bingley and the two hit it off.  Elizabeth Bennett, however, has a bad first meeting with Mr. Darcy.  The two of them have an almost instant dislike for each other.

Circumstances push them together, however.  Jane and Bingley continue to court, so Elizabeth and Darcy are thrown together as well.  Their attitudes towards each other start to soften.  A couple of small scenes beautifully illustrate this.  The first is that during a large group dance all the other dancers, players, and crowd completely disappear from the screen, leaving only Elizabeth and Darcy alone, dancing with each other.  This perfectly illustrates how both of them see only the other and everyone else at the ball might as well not be there.  Dancing was so popular because it was the only time it was socially acceptable for an unmarried man and woman to touch.  Darcy steals a touch a little later, though, when he holds ’s hand to help her into a carriage.  As he walks away he flexes his hand, showing how big an impact that simple touch had on him.

While the two oldest sisters are having these experiences, the two youngest, and Kitty, are swooning over the Army officers that have come to town with their regiment.  Especially interesting to them is a certain Mr. Wickham, who we come to find out has a past with Mr. Darcy.  and Kitty are quite silly in their actions, but they are still girls.  Mary, the studious sister, has trouble fitting in.  Into this mix comes Mr. Collins to inspect the Bennett’s property which he will eventually inherit.  He intends to marry one of the sisters.  He sets his sights on the oldest, Jane, but Mrs. Bennett steers him away because she feels Jane has a good shot with Bingley.  This means it falls to second oldest daughter Elizabeth to “take one for the team” and marry Mr. Collins, who let’s just say would not set women’s hearts aflutter.

is an independent young woman with hopes and dreams of her own.  These do not include a marriage of convenience to a man she doesn’t love.  Her mother practically has a seizure over any daughter of hers not wanting to get married to any man who asks, but her father shows just how much he loves his daughter by supporting .

Keira Knightley does a terrific job in the role of .  First, she is the only one I have seen who played a combination of still slightly tomboyish young woman, but one who matures as the movie goes along.  Perhaps this is due to her being the only actress in the versions I have seen who is the correct age for the role.  Even 26 year old Jennifer Ehle in the 1995 adaptation plays as mature right from the beginning.

Unfortunately, things start going bad for the Bennetts.  Neither Jane and Bingley, nor Elizabeth and Darcy, seem to be going in the right directions.  Things come to a head when ’s pride and Darcy’s prejudice combine to drive them apart.  He stuns her with a declaration, right after she has received a prior shock about him.  She reacts badly, although understandably.  As the film goes on, though, the more mature comes to realize that she may have made a rash decision.  Can the two manage to find a way to overcome these obstacles?

One thing that this movie does very well is to give some depth to supporting characters, even though the film runs not much more than two hours.  One such example is Brenda Blethyn’s performance as Mrs. Bennett.  Yes, she is quite funny in her pursuit of any and all suitors for her daughters, but there is a great moment when she responds to ’s criticism of her actions.  She turns on and tells her to wait and see how she feels when she has daughters of her own.  Yes, it is the old “wait until you have kids” refrain that almost every parent says to almost every child at some point.  What makes it great is the delivery.  With that one line this kind of silly character all of a sudden changes into someone who you understand and can even empathize with.

Another example is ’s friend Charlotte Lucas agreeing to marry a man she doesn’t love and that is not that great a catch.  asks her what she was thinking.  quite calmly, and a little sadly, explains to that she is 27 years old and is unlikely to get another offer of marriage from any man.  She does not have the options open to her that does.   It’s a bit of sobering truth about what women had to put up with back then.  This scene was from an uncredited rewrite done by Emma Thompson, who had won an Oscar for adapting Jane Austen’s book Sense and Sensibility.

One of my three favorite scenes in the film comes when , traveling with her uncle and aunt, stops at Darcy’s estate of Pemberley.  The house is open to the public.  During the tour they come upon marble statues and busts of the family.  Among them is one showing Mr. Darcy.  gazes at it with a combination of love, loss, appreciation, regret, admiration, and respect.  All of these emotions subtly play in Knightley’s eyes.  Any man would be lucky to have a woman look at him in such a way, especially one like Elizabeth Bennett.  It is just one of the reasons that Knightley received a well-deserved Oscar nomination for Best Actress.  The film also received three other nominations for Art Direction, Costumes, and Score.

A second favorite scene involves Darcy and Elizabeth meeting on an early morning walk.  What woman wouldn’t want to see the man she loves striding across the moor towards her to declare his love for her?  It is a very romantic scene.

Another scene Knightley just nails follows when she tries to explain her emotions to her father.  Her love for Darcy and her father’s love for her just shine out in this scene.  This is also Sutherland’s best scene in the film.  His portrayal of Mr. Bennett is my favorite of the versions I have watched.

The major complaints with this adaptation that I have heard are that it is not always faithful to the book and that Knightley is wrong for the part because she is too beautiful.  The thing is...a movie is not a book.  In the two hours that it has it must convey the key components of the story.  Scenes will inevitable be cut or changed to be a better fit for this different medium.  Second, Knightley is indeed very beautiful, but she also has substance in this film.  If she had just come across as a person with only looks and no depth then critics would have a point.  Jane Bennett is supposed to be the most beautiful of the daughters and Rosamund Pike can certainly hold her own with Knightley in the looks department.  Pike also gets a chance to do more than just play her patented ice queen role in this film.  She gets to show some real emotion.

Another complaint some people have is that the version of the film had an additional scene on the end that included a kiss – something that was not in the original book.  Again, a movie is not a book.  Why did the filmmakers not include it in the version released in The U.K.?  I don’t know.  Perhaps they anticipated the negative reaction from Austen purists and figured that Americans would be more accepting of the scene.  According to the trivia on IMDB, this ending scene was voted one of the best in movie history by Entertainment Weekly magazine.

Ladies, if you love the Pride and Prejudice story and long to be able to get the man in your life to appreciate it, too, then this is the version you should pick.  First, it has five beautiful actresses playing the Bennett sisters to get his initial interest.  Second, Knightley’s portrayal of makes the character one that most men would be interested in.  Third, Macfadyen’s portrayal of Darcy is one that won’t make your man want to slug him, nor is he the unrealistic, extremely sensitive modern man in pirate’s clothing from your basic “bodice ripper”.  He’s a “man’s man”.  Fourth, there is enough humor in the film to generate many smiles and an occasional laugh.  Fifth, men will be able to identify with Bingley, too, especially when he is trying to get up the nerve to propose and has the little scene where he is talking about how things were supposed to go in his plan, before the roomful of women he met didn’t follow it.  Finally, even though it is a little over two hours, it should not be so long that your guy is checking the time.  Do not try to get him to watch the more than five hour long, very faithful, 1995 version right off the bat.

Guys, if the woman in your life wants you to be a little more romantic, then suggest the two of you watch this movie together.  Even if she’s seen it before, she will probably want to see it again.  If she hasn’t seen it before then this will score some major points with her.  It’s a great movie for the upcoming Valentine’s Day.

When I originally saw this film I rated it four out of five stars.  I am quite stingy when it comes to giving five star ratings.  The film stuck with me, though.  I mentioned above that I watched it a few more times, as well as watching some of my favorite scenes even more than that.  I finally realized that I was being stupid.  A film that continued to have that much of an impact on me deserved to have a five star rating.

Even if you hate classic literature and all movies based on it, you should still give this movie a try.  It is the best acted, most accessible, and most romantic adaptation of Pride and Prejudice that I have seen and I give it my highest recommendation.