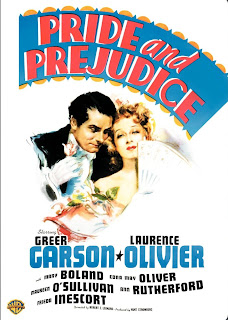 This is the third version of Pride and Prejudice that I saw.  I had seen the 2005 version a couple of years prior, and before that I had seen 2004’s Bride & Prejudice (more on that can be found in the parent post).  The 1940 version of the story is generally considered to be furthest from the original book.  That is primarily due to it actually being an adaptation of a stage play, not the novel.  The result is the version that is lightest in tone and that has the most humor.
It stars Greer Garson (Mrs. Miniver, Random Harvest) as Elizabeth Bennett and Laurence Olivier (Rebecca, Hamlet) as Fitzwilliam Darcy.  Olivier had just played Heathcliff from Emily Bronte’s the year before, so he was working his way through classic English literature.  Maureen O’Sullivan (Tarzan the Ape Man, David Copperfield) plays oldest sister Jane Bennett.  Ann Rutherford (), Marsha Hunt (Mary), and Heather Angel (Kitty) play the three younger sisters.  Edmund Gwenn (Miracle on 34th Street) plays their father Mr. Bennett, while Mary Boland plays their mother.
For those who don’t know the story, here is a quick overview (no spoilers):  The Bennett family has five unmarried daughters ranging in age from 15 to 21.  Because only a male heir can inherit their home, they will lose it to a cousin when Mr. Bennett dies.  If one of the sisters was to marry him, then they could keep their home.  Failing that, their best hope is to marry well.  A rich, single man, Mr. Bingley, moves to the area and he and oldest sister Jane Bennett are attracted to each other.  Bingley has an even richer and also single best friend, Mr. Darcy, who is visiting him.  Darcy and second sister Elizabeth Bennett dislike each other almost immediately.  They continue to run into each other at social events, or while visiting others, and despite themselves dislike turns to attraction.  Both are strong willed people and their actions, driven by her pride and his prejudice, continue to keep them apart.  Can they learn that the love they feel for each other is more important than these petty things?
Laurence Olivier is, well, Laurence Olivier.  He almost always does a fine job in his roles.  I could see similarities in his performance as Darcy in this film to his performance as Heathcliff in (1939).  Greer Garson gives a decent performance, but at the age of 36 she was not convincing as a 20 year old.  Two years later she would be playing the mother to a grown man in Mrs. Miniver (1942).
This film received an Oscar for Best Black and White Art Direction.  The costuming has caused some controversy, however.  Austen fans have complained that the filmmakers shifted the time period of the film from the early 1800s to the mid 1800s.  My guess is that the producers probably did this because of the massive success of Gone with the Wind the year before and they wanted to use similar costumes in this film.
I won’t get into the various changes to the book’s plot.  Suffice it to say that any two hour long adaptation will be required to make cuts in characters and scenes.  One thing that did feel a little rushed was the ending.  They did make it a slightly happier one for all of the Bennett sisters, though.
This version of Pride and Prejudice is still an entertaining movie.  If you have seen other versions, but not this one, then you should probably watch it to see how it compares to the others.  And as I mentioned at the top, it presents the most humor of any of the versions.
If you are a stickler for adaptations staying as close to the book as possible, then you will want to skip this.  For everyone else, I recommend you give it a try.
Chip’s Rating: 3 out of 5 stars