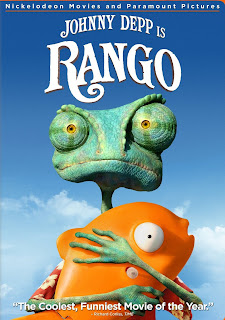 Rango is nominated for the Best Animated Feature Film Oscar and it is considered the frontrunner.  It is directed by Gore Verbinski (Pirates of the ) and features the voice of Johnny Depp as the title character.  It is both a parody of, and a love letter to, the classic western.  It manages to combine just about every feature of a standard western plot, but does it with animated creatures of all sorts.  The result is an interesting mix of new and old.
Much like the pet rat in the animated movie Flushed Away (2006), Rango is a pampered pet lizard who spends his days making up stories and acting them out using the props his owners have put in his terrarium.  Just as in Flushed Away, he accidentally gets cast out into the real world and has to deal with it.  Also like in Flushed Away he encounters a town of creatures that mirrors a human town, but in Rango’s case it is an 1800s western town.
After his terrarium falls out of his owner’s car he finds himself on the side of a highway in the middle of the desert.  It is scorching and he asks an armadillo where he can find water.  He is directed to the town of , which is a day away.  He starts to make for it, but encounters a hungry hawk.  One funny chase scene later he ends up sleeping in a storm drain for the night.  In the morning he meets Beans, a female lizard from the town of .  She takes him back with her.
Beans and the entire town are right out of a western.  They are in period dress and all the buildings, guns, speech patterns, etc. are right out of a classic film.  There’s no explanation for this; you just have to go with it.  There’s also no explanation for why some creatures are proportional to Rango (i.e. the armadillo) and some are not (i.e. a fox).  Of course, in a movie about sentient, talking animals I'm not sure why anyone would dwell on those much more minor things.
Rango strides into the saloon and starts making up wilder and wilder stories to impress the locals.  His claims land him facing a set of bad guys who have been terrorizing the town.  At first it looks like he has scared them off, but in reality it is the hawk that did it.  Through another funny sequence he ends up accidentally killing the hawk.  He is made sheriff.  The town faces an even bigger issue, though – their water is almost gone.
Rango gets mixed up in people trying to steal the water, as well as a plot to cheat people out of their land.  There’s another great chase sequence, this time including aerial maneuvers.  If you’ve seen a few westerns you will be able to figure out early on who is behind everything.  For everyone else, though, it may be a surprise.
There are a number of in-jokes in the film.  Watch for animated appearances by Hunter S. Thompson (a favorite of Depp’s), as well as a certain actor once known for playing cowboys, but now known for directing Oscar winning films.  Watch carefully when Rango is drawing in the air.  Some of the symbols should be familiar.  In addition, one scene features a character holding a poker hand with two pair.  The aces and eights are the classic “dead man’s hand” – so named because Wild Bill Hickok was holding it when he was shot dead in the 1870s.
My favorite running joke is an owl mariachi band that keeps appearing, sort of like a Greek chorus.  Every time they sing they predict the imminent death of our hero.  At least one of their songs probably should have been added to Oscar’s Best Song category, in order to give it more than two nominees.
This is a fun movie, especially if you like westerns.  Unless you refuse to watch animated films because you believe they are “only for kids” then I highly recommend this film.
Chip’s Rating: 4 out of 5 stars