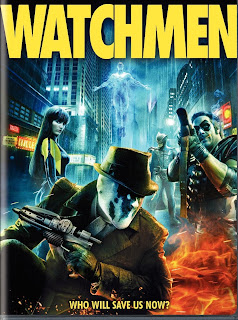 Here is what Watchmen is not – it is not a superhero movie.  If you are looking for another Spider-Man, or God help you, Fantastic Four, then this is not the movie to see.
What it is is a murder mystery set in an alternate history where costumed vigilantes have been around since World War II.  The movie opens with the death of one of them, killed in his apartment by someone you can’t identify.  It is also a very realistic look at just what kind of person would be drawn to being a costumed “hero.”  Hint – that kind of person would probably not be very well adjusted.  It is a dark story, told during the height of the nuclear arms race in the mid 1980s.  While the smaller events are going on, the world at large is on the brink of nuclear war between the and the U.S.S.R.
Watchmen is based on the best graphic novel of all time.  The book is so good Time Magazine listed it as one of the best 100 novels of the 20th century.  It has incredible depth of story and character.
Because of this depth, for twenty years the book proved too difficult to adapt into a movie by everyone who tried, that is until Zack Snyder took a whack at it.  He was a huge fan of the novel and he insisted on being as true to it as possible.  The result is probably the best anyone could hope for.  Yes, they had to cut portions out of it, but it still manages to get across all of the important pieces.  I have read the book many times and I only had minor quibbles with changes the movie made.
There are multiple versions of this movie available.  There is the Theatrical version, which is 162 minutes; the Director’s Cut, which is 186 minutes; and the Ultimate Cut, which is 215 minutes.  I recommend the Director’s Cut for those people who have not read the book and the Ultimate Cut for those who have read it.
The Director’s Cut adds some small transition scenes here and there and a couple of scenes become a little more violent.  The biggest difference is that a supporting character who died off screen in the Theatrical version has his death scene restored in the Director’s Cut.  It’s a moving scene from the book, so I was glad to see it in the movie.  It was only cut to reduce the running time of the theatrical release.  The Ultimate Cut includes the Watchmen animated story The Tales of the Black Freighter integrated into the movie.  It had been released as a separate 25 minute short at the time of the movie’s release.  It weaves in and out of the graphic novel’s narrative, so the Ultimate Cut does the same thing for the movie’s narrative.
If you think all superhero movies are silly, or if you think they are for kids, then you have to see this movie.  Better yet, read the graphic novel then see this movie.  That is the only way to convey just how far removed this story is from all the superhero movies that flood the theaters every summer.

By the way, this is a violent movie so it definitely is not for the kids.  For everyone else, I highly recommend this film.
Chip’s Rating: 4 out of 5 stars