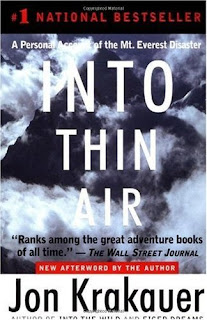 In May of 1996 nine climbers from four different expeditions all died near the when a freak storm caught them by surprise.  Three more people would die before the month was out.  This was the deadliest season in the history of the mountain.  By sheer coincidence one of the climbers who survived this tragedy was writer Jon Krakauer.  He was greatly shaken by the event and after writing his contracted magazine article, he began working on this book to more fully document what went wrong.
Even though I hike, I have never had an interest in mountain climbing.  Krakauer does such a good job with the writing on this book that I finally understood just what would drive a person to continue up a mountain when death might be waiting for them.
The opening two paragraphs of the book grab you immediately.  He describes how he is at the , something he has thought about for a long time, and he can’t care less.  The lack of oxygen, sleep, and food that he has had to endure to get there has made him almost oblivious to his accomplishment.
Krakauer was a strong climber, so he was among the first of the people to the top among four expeditions that all tried to summit Everest on the same day.  When he started down he noticed some clouds coming in, but was too oxygen deprived to think about it.  He finally made it back down to the camp he started from and collapsed in his tent.  When he finally woke it was to find that several climbers had been caught on the mountain by a freak storm.  Among them were two very experienced expedition leaders, both of whom had summitted Everest before.
Krakauer does more than just describe the tragedy.  He takes you back to some of the historical attempts on Everest.  He goes over how he got involved in the climb.  He introduces you to many of the people that were sharing the climb with him that month.  Finally, he describes the aftermath of the tragedy, as well as some of the controversy that his writing stirred up.
One of the challenges with climbing into the “kill zone” where most people need supplemental oxygen is that the lack of oxygen to the brain slows down your thought processes to that of a small child.  This leads to bad decisions, but it also impacts memory.  Krakauer documented at least one event that he later came to realize had never actually happened.  He had a perfect memory of talking to one person just before he reached safety and the other person disappeared.  He later found out that he had actually talked to another person entirely, one who had also survived.  The person he thought he had spoken to, the man who had not survived, had apparently not made it anywhere near to safety.  Krakauer had accidentally caused more emotional distress for that man’s family because of his faulty recollections.
Another controversy that arose is that Krakauer seemed to fault a guide that had summitted early and had returned to the camp without waiting near the top to actually, you know, guide people safely up and down the mountain.  After his initial article appeared, people jumped on this guide to make him the villain of the piece, when that was not Krakauer’s intent.  In this book he has tried to show the extreme lengths this guide went to attempting to locate the lost climbers once he realized how bad the situation was.
This book was very popular and it received a lot of acclaim.  I recommend it to anyone who has ever wondered what it might be like to climb mountains in general, and to climb Everest in particular.