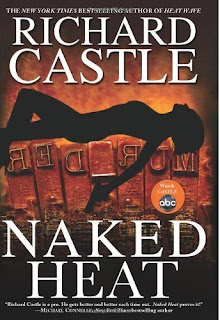 Note – if you have not read the prior posts introducing Castle, discussing the TV show, and discussing the book Heat Wave, please do so.  You need to understand what they are about in order to “get” this book.
This is the second book written by “Richard Castle”, the fictional writer on the TV show Castle.  It is a little different from the first book, Heat Wave, in a couple of respects.
The first is that this has fewer scenes where they are based on events that happened in Season 2 of the show.  In a weird way the second book has actually paralleled some events that have happened in Season 3 – events that Castle could not have known would happen when he was writing the book.
The second is that the book is a little thicker – about 300 pages – and that it is more of a traditional crime novel than the first one.  Leaving out the connections to the show, this book is probably a better standalone read than the first one.
It’s not completely devoid of references to the show.  In Season 2 Castle had his daughter duct tape him to a chair so that he could figure out how to get out of the predicament.  It’s a very funny scene on the show, and it turns into a very deadly scene in the book when Detective Heat ends up in a similar situation.  Another scene on the show had Castle playing with a new toy helicopter he was flying around his apartment when he should have been working on the book instead.  In the book, Rook is doing something similar instead of writing.  The helicopter figures in at a key point.
On the flip side, the book opens with Rook being found with a dead body, exactly how Season 3 of Castle opens for the character of Castle.  The book also has two characters other than Heat and Rook getting into a relationship, while on the show the same thing has happened.  In both cases, though, the book was already published, so these are more the writers using the same ideas for both book and show.  It actually somewhat weakens the illusion of Castle really being the author of these books.
This book is a must read if you are a fan of the TV show Castle.  It you just like reading mystery novels, and this sounds interesting, then you should probably read Heat Wave first.  Events in the lives of Heat and Rook from the first book play a part in this second one.