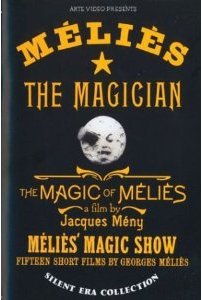 Question: What was the first special effects laden, science fiction blockbuster?
Answer:  The French film Le voyage dans la lune, or as it was known in the , A Trip to the Moon.
When this came out people were amazed by what they saw.  Moving pictures had been available for a while, but they were basically short stage acts captured on film.  This movie used many new techniques including fades, superimposed images, many cuts/edits, and even some early animation to achieve the visual effects.  While the result is something anybody could put together on their computer nowadays, back then it was nothing short of a marvel.
This movie was hugely popular all around the globe, and especially in the   People went to see it again and again.  The creator of the movie – Frenchman Georges Melies – did not end up making much money off of it, unfortunately.  Thomas Edison’s lab technicians secretly copied the movie before Melies could bring it to the   made a ton of money off of it, while Melies went bankrupt later in life.  Of course, Melies based the story on Jules Verne’s novel From the Earth to the Moon and H.G. Wells’ novel The First Men in the Moon and he did not give them credit.
I have been using the term “movie” to describe this because that is what it is.  This might have made you think it was as long as movies are today.  This is not the case.  It has a running time of a little over 11 minutes.  Back then there were no long, narrative movies.  It wasn’t until 1915’s Birth of a Nation that the potential for movies being able to tell a complete story was fully realized.  (Unfortunately, that story was about how the Ku Klux Klan saved the from black people who “didn’t know their place”, but it’s still an important piece of movie history.)
A Trip to the Moon’s story is just what you might imagine.  A group of scientists decide to travel to the moon.  They build a massive cannon and bullet shaped craft, and fire it at the moon.  Once there they meet the natives, who are not happy to see them.  Can they escape?
You do not have to search this movie out in rental stores.  There is no waiting for it to come up in your Netflix queue.  The movie is in the public domain and there are several versions of it on Youtube.  I am embedding the “official” version of the movie.  (I have no idea what makes it official.)  Please note that it has voiceover narration that did not exist when the movie was released.  This narration is designed to help people understand it better.  There are versions without the narration, if you want to see it that way.
One other note - the movie originally had a final scene that included a parade.  This has been missing from versions of the film for a very long time, and is missing from the versions on Youtube.  In 2002 a more complete print of the movie was discovered in a French barn.  Not only did it include this sequence, but each frame had been hand colored.  This version was restored and is now for sale.  I have not seen it.

If that looked familiar to you it is probably because it was the inspiration for the video Tonight, Tonight by The Smashing Pumpkins.  Here is that video for a comparison.  Watch for the name of the rescue ship at the end.

Standalone, I would give this movie three stars, but I am adding a star because of its historical significance.
Chip’s Rating: 4 out of 5 stars