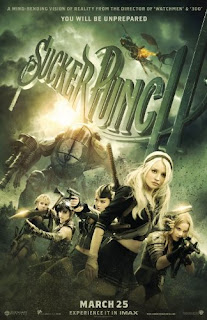 Sucker Punch was just released today.  I went to the opening then came back home to work on today’s blog posts.  These are my immediate impressions.  Over the coming days I will probably mull over things in the movie.  I had a lot of anticipation built up to see this movie.  As such, it made it harder for the movie to live up to those expectations.  I may ultimately change this from a three star recommendation to a four star one.  [Note – a new review of the superior, extended version available on Blu-ray follows this original review of the censored, theatrical version.]
The premise is that a young woman has just suffered the death of her mother.  Her step-father finds out that she and her younger sister are going to inherit everything, not him.  He has her committed to an insane asylum.  Once inside she escapes into fantasy worlds in her imagination to deal with the situation.  Director Zack Snyder describes the movie as “ in Wonderland….with machine guns.”


Like Inception, this is a movie that you will have to pay attention to.  There are multiple “realities” presented and you have to watch carefully to know where reality ends and fantasy begins.  I have already read two critics’ reviews that showed that they completely missed the first break with reality that occurs in the movie.
Pay attention to the title of the movie.  From it I had speculated on just who was getting Sucker Punched and I turned out to be right.  I wish I hadn’t been, though.  The result is a movie ending that will probably turn off some people, just like the ending of the third Matrix movie did.
If you want to just watch this movie for the fantasy action sequences then go ahead.  They are kick ass and over the top.  There are four major sequences dealing with the retrieval of items the characters will need to escape from the asylum.  You will recognize nods to several other movies during these scenes, from the shell casings dropping into the camera scene from the Matrix, to the camera-revolving, reflected swordplay scene from Ultraviolet, to any number of anime movies.
If you want to look a little deeper, though, you can watch another kind of movie.  This one is about the nature of reality.  Just whose story is it we are actually being presented with, anyway?  Even the “reality” at the beginning of the movie starts with a curtain opening on the scene suggesting it is not real.  It isn’t, at least to us, the audience.  Adding to the “unreality” of it all, anachronistic music is played in the opening scene and throughout the movie (which is set in the early 1960s.)  I really liked the cover version of White Rabbit that was featured during the first fantasy sequence where all the women are teamed up together.
There were some scenes that I expected to see that were not in the movie.  This was based either on them being in the trailer, or on the actresses discussing the various kinds of training they underwent for this movie.  For instance, they all had dance training, but not once during the movie are they shown dancing, even though it is a big piece of the plot.  It all happens off camera.
I have read that Snyder had to cut one entire scene in order to get a PG-13 rating for this movie.  He submitted the movie to the MPAA seven times, each time cutting the scene more and more, until he finally cut it entirely.  The MPAA wanted the scene to show a man sexually forcing himself on a woman, not a woman being seduced by a man, and Snyder didn’t like that because it completely changed the movie.  (By the way, can someone explain to me the logic where a man enjoying nonconsensual sex is PG-13, but a woman enjoying consensual sex is an R?  You’ve got to laugh at the MPAA.  Just when you think they can’t get more ridiculous they outdo themselves.)
Speaking of sex, I might as well address this now.  Prior to the movie opening there were some people complaining about how the women are presented in this movie, without those people ever having seen the movie, of course.  It really amuses me how much outcry there is about how Sucker Punch “sexualizes” the women in it.  Where were all these hypocrites when Snyder “sexualized” the men in his movie 300?  They didn’t seem to have an issue with it at all.
If you are looking for either a movie with some big action sequences, or a movie that can give you some depth, then I recommend this film.
Chip’s Rating: 3 out of 5 stars

Blu-ray Release Update (July 23, 2011):
The Blu-ray has both the theatrical version and an extended version.  The extended version is rated R, so it is apparently the original version of the movie that Snyder was forced to alter in order to get a PG-13 rating.  (Most “unrated” home video versions simply contain scenes different from the theatrical version and they are unrated because they were never submitted to the MPAA.)  Since this one is rated, that means it is not just a different version to make more money, but the true version of the movie.  You should definitely watch the extended version.  It is, at worst, a “soft” R rating.  None of the added scenes include any gore or any sex.
There are a total of almost 18 minutes that had been removed from the movie in order to get to the version that was released theatrically.  There is an exhaustive list of all 78 changes at this link.  It is imperfectly translated from the original German text.  Don’t go here if you haven’t at least seen the theatrical version because there are major spoilers.
The largest differences address complaints about things missing from the movie.  These include a sequence where there is a montage of singing and dancing (the actresses had discussed all the dance training they received, but none was shown in the film.)  There are also more intense action sequences.  The actresses had also discussed their weapons training and one had said that she asked for extra time on the weapon that Vanessa Hudgen’s character uses since it was such a big gun and firing it was so intense.  The gun ended up never being used in the theatrical version.  In the extended version, though, there is a several seconds long scene where Hudgen’s character gets to use it and it is quite kick ass.
Finally, the much discussed “High Roller” scene that caused all the problems with the MPAA is included in the extended version.  After seeing it I am even more flabbergasted that it was the reason that the MPAA was giving the movie an R rating.  First, it’s not even a sex scene.  No sex is even implied, let alone shown.  What it is is a seduction scene.  It is also absolutely critical to understanding the outcome of the female character in the next scene.  The very next scene was in the theatrical version, too, and it didn’t make a lot of sense.  Seeing the High Roller scene before it, and especially listening to his dialogue, now makes the following scene understandable and more poignant.  I feel that that is what bothered the MPAA – the following scene is more emotionally disturbing because of the High Roller scene and I guess they couldn’t handle that.  I say that it gives some clarity to a movie that was already open to interpretation in many areas.
I highly recommend seeing the extended version of the movie.  For those without Blu-ray players, though, the DVD only contains the theatrical version of the movie.
Chip’s Rating for the extended (original) version of the movie:  4 stars out of 5
DVD                      Blu-ray
Posted by Chip Lary at 10:55 PM