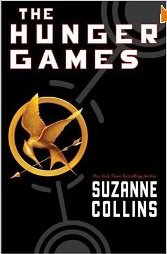 The Hunger Games was written by Suzanne Collins.  She had previously published some other books, but this is the one that launched her onto the Best Seller lists.  The book falls into the “Young Adult” genre, but like the Harry Potter books it has ended up being enjoyed by many grownups, too.
I first heard about the book from an online post on IMDB.  (There is probably going to be a movie.)  One woman enjoyed it so much she said, “I want to make love to this book!”  That might have been the best recommendation I had ever read, so I picked it up.  While I also enjoyed the book, I did not have quite the same reaction she did.  I mean, we’re talking paper cuts in a pretty sensitive area.
The premise is that at some point in the past the government collapsed.  The country reorganized into thirteen districts around a central, authoritarian government.  About 75 years ago one of those districts rebelled and was brutally put down.  As punishment, and to remind the remaining twelve districts who is in charge, the central government created the Hunger Games.  Every year each district must provide one boy and one girl, ages 12-18, as participants in a televised combat competition – one where there is literally only one survivor.
We meet the sixteen year old female protagonist, Katniss Everdeen, in District 12.  This area roughly corresponds to .  People there mine coal and try to subsist on what food they can find.  It is a tough life.  To help her mother and younger sister, Katniss illegally hunts animals in the forest.  Her father taught her how to use a bow and arrow before he died.  She has partnered with a boy, Gale, and the two of them make a pretty good team.  They are friends.
Her district selects the Hunger Games participants by lottery.  Katniss is horrified when her twelve year old little sister is picked and she immediately volunteers to take her place.  She knows it would be a certain death sentence for her sister and that she has probably just sealed her own fate.  She loves her sister too much to do anything else.
The boy who gets picked, Peeta, is the son of the baker.  Katniss does not know much about him.  She remembers him sneaking her some bread when they were both younger, but that is about it.
They get sent off to the capitol, along with their “advisor.”  Every district’s selections get an advisor who is themselves a past champion of the Hunger Games.  Unfortunately for Katniss and Peeta, the only living champion from their district is an older man who is a drunkard.  He came back from the Hunger Games forever changed.
Once in the capitol all the participants are given training time.  Not only do they use this time to assess their opponents, they also use it to try to form alliances.  To their surprise, their advisor is a pretty shrewd politician in regards to getting them help.
Katniss discovers that her skill with a bow and arrow, as well as being able to live in the forest, might be ones that will allow her to survive for a while against much stronger competition.  It’s not just the other opponents you have to watch out for; the arena itself might kill you with dangerous plants and animals.
She also makes another discovery; Peeta has been in love with her for quite a while.  That was why he helped her by giving her bread.  He never said anything because he assumed she and Gale were together.  Even though she has had to grow up quick to support her family, emotionally she is still much younger than sixteen.  She is confused by Peeta’s confession and does not return his love.  With not just Peeta, but everyone assuming she and Gale are a couple, she starts to wonder if there might have been something there between them.  Now that she is in the Hunger Games, she will probably never get the chance to find out.
In order for her to survive the Hunger Games everyone else, including Peeta, will have to die.  She will have to make some very hard choices.  On the flip side, in order for Peeta to survive, she will have to die.  Will he be an ally because of his feelings for her, or has she made an enemy because of her ambivalence toward him?
This book was written to stand on its own.  It became so popular that the author followed it with two more books, Catching Fire and Mockingjay.  I don’t want to describe those too much, since that would be spoilers for what happens in the first book.  The second book deals with the aftermath of these Hunger Games, growing discontent among the districts, and the next Hunger Games.  The third book deals with out and out rebellion against the central government.
Because of the writing style, all three books are quick reads.  You can just read the first book and be done.  If you read the second, though, you will want to read the third.  Like the original Star Wars trilogy, the second episode in this trilogy ends with a cliffhanger.  The third book wraps up all the loose ends.
I highly recommend all three books.  I loaned the first one to a friend.  He finished it while on a quick trip to and didn’t want to wait to get home to borrow the second book from me.  He went out and bought the second book so he could start reading it right away.
Only the first book is available in paperback, and that is the larger size trade paperback.  The hardcover prices for all three are very reasonable, so I am including a link to a set of all three for $28 below.