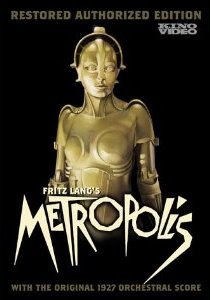 This movie was the first big budget, feature length science fiction movie.  How big was the budget?  Factoring in inflation it was roughly the equivalent of $200 million.  What did that buy?  Massive sets right out of the German expressionistic art movement, special effects that were decades ahead of their time, 37,000 extras, and the vision of the most influential director of his time, Fritz Lang.
The concept of Metropolis is that man has achieved utopian living.  Everyone is happy, wealthy, carefree, and is able to do great things.  Metropolis, the city where the movie takes place, is massive and huge towers reach to the sky.
In this city lives Freder, a man who is the son of the city’s founder and leader.  One day in the park he sees a beautiful woman who appears to be teaching some children.  He follows her and she seems to disappear.  He sees that she has gone underground.  He continues to follow and is shocked to discover an entire underground city of people whose job it is to run the machines that keep his city a utopia.  His father has kept this hidden from almost everyone, including his son.
He spends some time there, experiencing what these workers do.  He starts to develop a relationship with the woman he saw, whose name is Maria.   As she tells him, the people above are the head, the workers below are the hands, but they are completely separate from each other.  The only way for the two to unite is for someone to provide the heart.  Maria and Freder decide to try to do that.
He returns aboveground and confronts his father about what he discovered.  The father, of course, was already aware of this and isn’t interested in anything changing.  He enlists the help of a scientist to try to put an end to all of this, but the scientist has an agenda of his own.  He creates a robot duplicate of Maria to try to put an end to her ability to lead people – a sexy, evil robot, of course.  Brigitte Helm plays both roles and she was the one who people most remembered from the movie.
As with many films from this era, parts of it have been lost over the years.  In addition, some countries would just edit pieces out that they didn’t like.  The result is that there were more than a dozen versions existing, none of them the complete one.  While researching for this post I found out that in 2008 an almost complete version of the film was discovered in a museum in .  It had 25 minutes of footage that was thought to have been lost forever.  This brought the running time of the movie back to within five minutes of its length when it was first released.  It was screened for some special audiences in 2010.  I have only seen an earlier version that was missing this footage.
Good news for people who have Netflix and want to see the restored version.  I checked, and not only do they have it, but it is available for Instant Viewing.  Now that I know it exists I will be buying the new version, so I will wait until then to see it.
This movie was hugely influential.  You can see its impact on Blade Runner, The Matrix, , and yes, even Star Wars.  It is said that the look of C-3PO was based on the robot from this film.
The only thing that may detract from your viewing experience is the presentation of the acting.  Back then people were still used to “acting to the back row” of the theaters that their plays were showing in.  That meant they would sometimes exaggerate facial expressions or body language.  Viewed close up by a movie camera, those exaggerations look over the top to a modern audience.  You just have to understand that this is how acting was done back then and go with it.
Unless that sounds like something that would kill the experience for you, I highly recommend this movie.
Chip’s Rating: 4 out of 5 stars