Movie and Book – The Girl Who Kicked the Hornet’s Nest 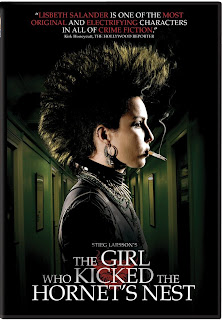 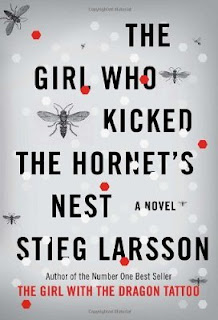 Author Stieg Larsson was the Editor-in-Chief of the Swedish magazine Expo.  He completed three novels, and had a fourth partially written, when he got a publisher to buy them.  Unfortunately, he died soon after this.  As a consequence he was never able to finish what he intended to be a six book series.
The three completed books were published and became very popular in .  They were later translated into other languages and became very popular around the world, especially in the
The two main characters of the books/movies are Mikael Blomkvist, a crusading writer and editor at the fictional Millennium magazine, and Lisbeth Salander, a computer hacker with a seriously messed up past.  She is the “girl” in the title.
The Girl Who Kicked the Hornet’s Nest picks up right where the events of the second story ended.  It will be impossible for me to discuss much of anything about this third story without including spoilers for The Girl Who Played with Fire.  If you do not want to see those spoilers, then please stop reading now.
Lisbeth Salander has been rushed to the hospital in critical condition.  Will her brain injuries kill her, and if they don’t, will her brilliant mind be affected?  If she does survive she faces a long recovery, to be followed by a trial for the various crimes she has been accused of.
Blomkvist uses the time of her recovery to set up a legal defense for her.  His sister is a lawyer and agrees to represent Salander.  Can she get Salander to help herself, though?  Blomkvist arranges for Salander to get a clandestine internet connection while in the hospital and this allows her to tap into other hacker resources to help uncover information that will be needed.  Much of the latter half of the story is the trial.
Unlike The Girl with the Dragon Tattoo, this book and movie diverge more, and that is a good thing.  Like The Girl Who Played with Fire, this book also gets bogged down in subplots with supporting characters that are irrelevant to the main story.  It also spends a ton of time with the inner workings of the Swedish government and various secret police organizations.  This is where I feel that the author’s death tied the hands of the book publisher.
Had Stieg Larsson lived I feel the publisher would have worked with him on editing the novel so that it was a tighter story that did not lose focus from time to time.  He also has a number of two dimensional characters in the book that really needed to either be dropped, or fleshed out more.
The movie cuts to the chase and focuses on the main story.  For this reason I actually consider the movie to be better than the book it was based on.
Both book and movie, while still entertaining, are a bit of a step down from The Girl with the Dragon Tattoo for one major reason: like The Girl Who Played with Fire, the two main characters almost never interact during the entire story.  After seeing what a great team these two people made in the first story, it is a disappointment not to get that same kind of collaboration in this story.  The plot does not allow for that, though.
The other thing that became more apparent in the second story becomes the driving force of this third story.  Larsson’s male characters are all either saints who are completely politically correct in regards to women, or they are all evil monsters who prey on women and will stop at nothing to use them and destroy them.  There are no shades of grey.  A great many characters introduced in the second story are in this one, too, and these limitations lead to most of them being two dimensional, almost cartoonish, figures.  While this theme was evident in the first book, it took a back seat to the story.  In the third book it is central to the plot as many of these men work together to try to destroy Salander.
I am recommending both book and movie, but if you only want to follow the story and don’t have time for both, then I recommend just watching the movie.
Even though Larsson planned for there to be a total of six books, this story gives a satisfactory end to the two main characters.  There is no cliffhanger ending like the second story.  There are some plot points that are left hanging, ones that would obviously have been explored more in later books.  The one I am most disappointed in not being able to read about is that Lisbeth Salander had a twin sister that disappeared when Salander was committed to a mental institution.  What happened to her and how did she turn out?  We’ll probably never know.
I mentioned that Larsson had partially completed a fourth story before he died.  It is unknown if that will ever be completed by another author.  It has been tied up in legal proceedings for years.  Larsson died without a legal will, so ownership of the story is up in the air.  The woman who Larsson lived with for more than 20 years says that she owns it.  She was never married to Larsson, though, and only recognizes spouses when it comes to inheritance.  They determined that his property, including this uncompleted story, belonged to Larsson’s family.  Understandably, this woman is refusing to turn over the manuscript and is suing for the rights to it.
Chip’s Rating:  3 out of 5 stars