Movie and Book – The Girl Who Played with Fire 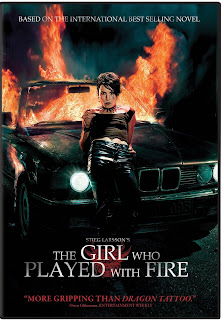 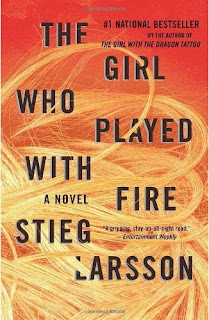 Author Stieg Larsson was the Editor-in-Chief of the Swedish magazine Expo.  He completed three novels, and had a fourth partially written, when he got a publisher to buy them.  Unfortunately, he died soon after this.  As a consequence he was never able to finish what he intended to be a six book series.
The three completed books were published and became very popular in .  They were later translated into other languages and became very popular around the world, especially in the
The two main characters of the books/movies are Mikael Blomkvist, a crusading writer and editor at the fictional Millennium magazine, and Lisbeth Salander, a computer hacker with a seriously messed up past.  She is the “girl” in the title.
The premise of The Girl Who Played with Fire is that two investigative journalists are murdered right before they are going to publish a major expose.  These two were working with Blomkvist and were friends of his.  The murder weapon that is found has Salander’s fingerprints on it.
Lisbeth Salander was shown in the first book to be an intensely private person, who has some major issues in her past.  Because she becomes the top suspect in these murders, her privacy is shattered and her past is splashed all over the news.  Her father repeatedly assaulted her mother when she was little.  In retaliation Salander literally set her father on fire.  He survived the attack and disappeared, while Salander was committed to a mental institution.
This past, plus the current events, plus her pierced, tattooed appearance, drive the press crazy.  They have a field day with the story.  Salander does not turn herself in to the police; she instead goes into hiding, which makes things look even worse for her.  With her skills and resources, though, she can hide very effectively.
Blomkvist does not believe that she killed his friends and he sets out to prove her innocence.  Not even he can locate her, though, so he tries to learn more about what his friends were going to reveal and what might have led someone to kill them.  He ends up finding no less than a conspiracy at the highest levels of government, and in an unlikely coincidence, it also connects with Salander.
Unlike The Girl with the Dragon Tattoo, this book and movie diverge more, and that is a good thing.  The book gets bogged down in subplots with supporting characters that are irrelevant to the main story.  It also spends a ton of time with the inner workings of the Swedish government and various secret police organizations.  This is where I feel that the author’s death tied the hands of the book publisher.
Had Stieg Larsson lived I feel the publisher would have worked with him on editing the novel so that it was a tighter story that did not lose focus from time to time.  He also has a number of two dimensional characters in the book that really needed to either be dropped, or fleshed out more.
The movie cuts to the chase and focuses on the main story.  For this reason I actually consider the movie to be better than the book it was based on.
Both book and movie, while still entertaining, are a bit of a step down from The Girl with the Dragon Tattoo for one major reason: the two main characters almost never interact during the entire story.  After seeing what a great team these two people made in the first story, it is a disappointment not to get that same kind of collaboration in this story.  The plot does not allow for that, though.
A secondary flaw becomes more apparent in this story, too.  Larsson’s male characters are all either saints who are completely politically correct in regards to women, or they are all evil monsters who prey on women and will stop at nothing to use them and destroy them.  There are no shades of grey.  A great many characters are introduced in this second story and these limitations lead to most of them being two dimensional, almost cartoonish, figures.  While this theme was evident in the first book, it took a back seat to the story.  In the second book it almost becomes the plot.
I am recommending both book and movie, but if you only want to follow the story and don’t have time for both, then I recommend just watching the movie.
Both book and movie end with a cliffhanger.  You will need to read/watch the final book/movie to see how things turn out.
Chip’s Rating:  3 out of 5 stars