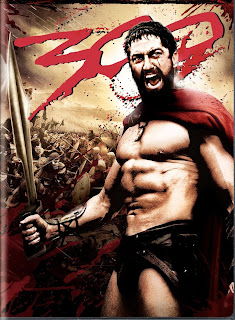 300 is based on the graphic novel written and drawn by Frank Miller.  It is an imaginative telling of the true historical event where 300 Spartans held off the entire invading army of King Xerxes of at for several days in the year 480 BC.
The movie has a great visual style influenced by the graphic novel.  Director Zack Snyder also manages to give good depth to characters that you know are on a suicide mission.  It would have been easy to just fast forward over getting to know any of them and get to the fighting.  Instead Snyder spends time showing King Leonidas of (Gerard Butler) and his wife Queen Gorgo (Lena Headey.) You know when they finally part that it will be for the last time, and because you have gotten to know them it is actually an emotional scene.
Leonidas learns that a massive Persian army is coming and that it will likely overwhelm the various city-states that made up what is now .  Back then they were all at best neutral and at worst enemies.  He tries to convince other city-states that they need to band together, but most of them ignore him.  Even though he is king, there are the prophets who “speak” for the gods, who can still tell him what the gods want him to do.  They forbid from going to face this army.  Leonidas gets around this by taking a very small group of men with him, and if he just happens to end up at where the army will be then that must just be a coincidence (wink wink.)
The movie spends time building up just how tough Spartans are.  They are trained from childhood for war and are given no mercy.  When they finally encounter some of the Persian army and they go through them in nothing flat it is a great scene.  It pays off all of the buildup on how good these guys are.
There are several action scenes, with fighting all around.  Some of them have some imaginative camerawork that adds an extra bit of oomph to them, too.
If you are a woman, you may be wondering “This sounds like something for guys.  Why would I want to watch this movie?”  To be frank, you might want to watch it for the men.
Snyder sent all of the actors who would play the Spartans off to several months of training to get them in the best shape possible.  All of them, even the king, had to be believable as incredible warriors.  The result is a whole bunch of actors who are really buff, and who are wearing nothing more than loincloths, boots, and long capes.  The lead actress in the movie, Lena Headey, commented that it was a lot of fun for her to come to the set every day because all the actors she worked with had such great physiques and that she basically got to stare at them all day.
It really amuses me how much outcry there is about how Snyder’s newest movie Sucker Punch “sexualizes” the women in it.  Where were all these hypocrites when Snyder “sexualized” the men in this movie?  They didn’t seem to have an issue with it at all.
By the way, these aren’t girly-men like in the movie Troy, who cry over the death of a young soldier, who whine about how their feelings have been hurt, and who go about looking like metrosexuals from ancient times.  No, these are real men.
Unless you just absolutely cannot stand the sight of blood, then I highly recommend 300.
Chip’s Rating: 4 out of 5 stars