Movie and Book – The Girl with the Dragon Tattoo 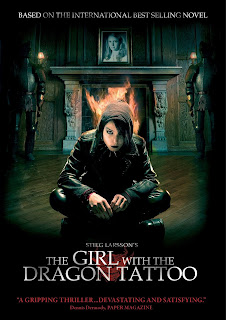 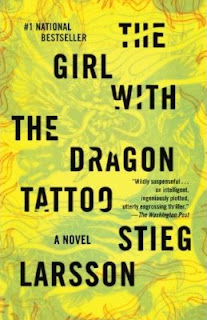 Author Stieg Larsson was the Editor-in-Chief of the Swedish magazine Expo.  He completed three novels, and had a fourth partially written, when he got a publisher to buy them.  Unfortunately, he died soon after this.  As a consequence he was never able to finish what he intended to be a six book series.
The three completed books were published and became very popular in .  They were later translated into other languages and became very popular around the world, especially in the
The two main characters of the books/movies are Mikael Blomkvist, a crusading writer and editor at the fictional Millennium magazine, and Lisbeth Salander, a computer hacker with a seriously messed up past.  She is the “girl” in the title.
The premise of The Girl with the Dragon Tattoo is that Blomkvist is hired by a rich, elderly man who wants him to look into the 40 year old disappearance of the man’s niece.  There is a personal connection for Blomkvist; the niece babysat him now and then when he was little.  He is skeptical that he will be able to turn up anything new, but since he has had to take a leave of absence from his magazine, he has nothing better to occupy his time.
Before hiring him the man had Blomkvist’s background researched.  The firm he hired used Salander as their primary researcher.  Hacking is illegal in , but her results are so thorough that her company pretends not to know how she achieves them.  They also ignore her outlandish (to them) appearance, with the many piercings, tattoos, etc.
Usually Salander moves on after completing an assignment, but something about Blomkvist’s situation keeps her intrigued.  She has hacked into his computer, so she follows his investigation into this cold case.  Despite the fact that she is anti-social to the extreme, she cannot help herself and she ends up getting involved in Blomkvist’s investigation, as well as with Blomkvist himself.
The book and the movie are relatively similar.  Both function as great “whodunit”s.  The movie tightens up some things and sheds some of the extended conversations about Nazi sympathizers in .  They change the way a break in the case comes.  In the book it’s a miscellaneous character that figures it out for Blomkvist; in the movie it is Salander and this is what leads to the two of them meeting.
There are two major reveals in this story.  You know, it’s funny how people can see things so differently.  I thought one of the reveals was completely obvious, right from the start.  The other was a complete surprise to me.  I loaned this book to someone else and when she read them she was 180 degrees the opposite of me.  The reveal I thought was obvious was a complete surprise to her, and the reveal that was a surprise to me was something she saw coming all along.  To me this is a sign of a really good story, that two people can read the same material and get such different experiences from it.
I am highly recommending both book and movie.  The book is better overall, in that it goes into more detail about the events surrounding the disappearance of the girl.  It does, however, spend time on the politics of and its history of sympathizing with Nazis during World War II.  The latter would have been more important to the Swedes, but is less important to readers in other countries.
You should definitely see the movie as well.  The actress who plays Lisbeth Salander, Noomi Rapace, did a terrific job with the character.  She became a star from this role and is now one of the hot actresses in .  She will be in the next Sherlock Holmes movie with Robert Downey, Jr.  She has three more movies already lined up after that, acting with the likes of Oscar winners Charlize Theron and Ben Kingsley.
Both book and movie can stand on their own.  You do not need to read/watch the next two books/movies, if you do not want to.
Chip’s Rating:  4 out of 5 stars