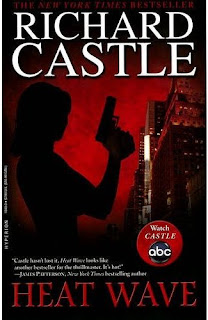 Note – if you have not read the prior posts introducing Castle and discussing the TV show, please do so.  You need to understand what the show is about in order to “get” this book.

It was the Fall of 2009.  Castle had just come back on the air for its second season.  On the show, the writer Richard Castle was preparing for the release of his first Nikki Heat novel – Heat Wave.  The physical book had been a prop on the show.

I was walking through a book store and from about 50 feet away I spied a display of books with the same cover, title, and author’s name.  I said, “No way!” and made a beeline for it.  It turned out to be exactly what it looked like – Richard Castle’s new novel.  Everything about the dust jacket and book played it straight, as if he was a real author.  They had a picture of the actor on the back as “Richard Castle.”  They had blurbs from other crime novelists – the ones that had cameos on the TV show.  Its dedication was to Detective Beckett.  They even had a bio of the author that described what we had seen on the show.  Other than a tiny “ on ABC” on the book jacket you would have no clue that this was from a fictional character.

I immediately bought it and read it.  On it’s own it would probably not stand out as a “must read”.  For the viewers of the TV show, though, it is a delight.  As you read through it you see the “influences” from the events on the show.  It’s almost like you get a behind the scenes look at an author’s creative inspirations, except that the author isn’t real.

The book stars Detective Nikki Heat, smart, beautiful, sexy, and no nonsense.  Tagging along with her and making her life a little miserable is award winning investigative journalist Jameson Rook.  (Castle, Rook, get it?)  Even though he irritates her, he is still useful, and she can’t deny that she’s attracted to him.  During a murder investigation their passion gets the best of them and they end up having some seriously steamy sex.

It was a hoot reading this for two reasons.  The first is that it gave the fans of the show a “release” of some of the sexual tension between the leads on the show, by reading about the characters based on them.  The second was that I couldn’t wait to see what Detective Beckett’s reaction to this sex scene would be on the show.

Nikki Heat ends up solving the crime, of course, with a little bit of help from Rook.  All of the other characters from the TV show also have versions of themselves in Castle’s book, especially the two male detectives and the female medical examiner, who is Heat’s best friend in the book, and Beckett’s best friend on the show.

The one disappointment with the book is that it is so thin.  The prop on the show was a book that was at least 400 pages long.  Heat Wave clocks in at just under 200 pages.

The book was on the New York Times Bestseller list for several weeks.  It was also an Amazon top seller.

So, we’ve got a real world book, written by a fictional author, who appears in a real world TV show.  In the world of the show the characters are dealing with the book and its author, both of them real, and his use of fictional characters based on them.  Want to get even more “meta?”  The actor who plays Castle, Nathan Fillion, actually went to some book signings for Heat Wave when it came out, just like an author would.  I don’t know if he signed his own name, or that of his character Richard Castle.

This book is a must read if you are a fan of the TV show Castle.  If you just like reading mystery novels, then you may want to check this out.  You may end up liking it enough to want to watch the TV show to meet the “real life” inspirations of the characters.

Finally, here is an excerpt from the appearance of the Castle cast at Comic Con 2010.  The show’s creator has just put Nathan Fillion and Stana Katic, who play Castle and Beckett, on the spot by asking them to read a bit from the book Heat Wave.  The bit is, of course, where the Heat and Rook characters have just given in to their attraction to each other.  (They stop before it gets too graphic.)  Fillion is a hoot during this and I love Stana Katic’s reactions, both to listening to Fillion read some, then to having to read some of it herself.

Note: the hardcover is being sold for the same price as the paperback at Amazon, so I have included a link to the hardcover.