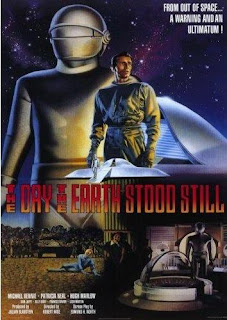 First things first – if you saw the recent remake with Keanu Reeves then please try to wipe that from your mind.  While I am not one of those people that hates remakes on principle, this particular remake was tough to watch.  They took an SF classic, threw in a bunch of special effects, and threw out everything that made the original such a great movie.
If you have not seen the remake then the original version is definitely the one to see.  If you have seen the remake, then watch this version so that you can overlay your memory with a much better movie.
It’s 1951.  The “Red Scare” is making people crazy.  Fear of communism and war is running rampant.  What if in the middle of all of this an alien ship landed in ?  The National Guard gets called out and surrounds the ship.  Someone in a spacesuit walks out of the ship.  Tension is running very high.  He starts to try to communicate, but one of the Guardsmen shoots him out of fear.  (Twenty years later life would imitate this movie when National Guardsmen fired on students at because tension was running too high.)
Once the alien is shot, a big robot appears from the ship and starts to retaliate by melting the tanks that are around the ship.  Human weapons have no effect on it.  The alien, named Klaatu, manages to get his robot protector to back down and the Guardsmen take the alien to a hospital to be treated for the gunshot wound.  He had taken on the appearance of humans in order to communicate, so they are also able to treat him.  While there he manages to escape.
His mission is to communicate an important message to representatives of all the nations on Earth.  Since his initial approach ended up with him getting shot he decides to try to understand humans better and to assess where they are in terms of development.  Can they overcome their baser hatred and fear or will they destroy themselves and everything on the planet with their new nuclear weapons?
He ends up staying with a young widow and her son.  Through them he sees potential for humans.  He also interacts with a scientist, who shows him that humans are capable of reason.  At first they think he’s just any other man.  Eventually they start to suspect him and he tells them who he really is.
While all this is going on the government is frantically trying to find him and get him back.  They have also been unable to get into his ship.  On the other hand, because the Guardsmen are still surrounding the ship, Klaatu has not been able to get back into it, either.
As you might expect things come to a head.  The final act brings some great tension.  You learn the reason for the title of the movie and the point that the movie is making is strongly driven home.
Klaatu is played by Michael Rennie (as any Rocky Horror fan could tell you.)  He was a British actor and was chosen for the part because American audiences wouldn’t recognize him, so he would be more believable as an “alien.”  This is his most notable movie.  Future Oscar winner Patricia Neal has an early role here as the widow.  Sam Jaffe, who was soon to be blacklisted by the McCarthy hearings for fear of communist sympathies, played the scientist.  This is another case of real life imitating art.  The movie was directed by Robert Wise, who would go on to make many other films including The Haunting (1963) and The Sound of Music (1965.)
A pop culture note – this is where the phrase “Klaatu barada nikto” comes from.  It is a phrase that is very important in the movie in regards to the powerful robot.  It has shown up again in many TV shows and movies, most notably Army of Darkness (1992) where there was a running joke that the main character could never get the phrase correct.
One other note – the score for the movie was mostly performed on a theremin.  You may not recognize the name, but you definitely know the sound.  Practically every flying saucer movie that followed this one used the same instrument to create the eerie sound of the saucer flying.
Chip’s Rating: 4 out of 5 stars