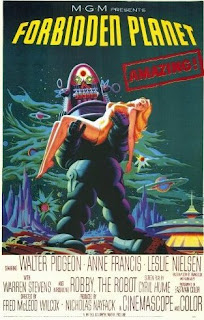 This movie is both sci-fi and SF (see my explanation of those terms in the category introduction post.)  On the surface it can be enjoyed as a simple monster movie with some jokes from a comic relief character.  Dig a little deeper and you find a story that is based on Shakespeare’s play The Tempest, and that incorporates the concepts of the conscious and subconscious as major plot points.  It also throws in two different mysteries to solve.
A ship is sent to the planet Altair-4 to check on colonists who were sent there twenty years earlier.  When the ship arrives they are contacted by an angry man who tells them he needs nothing and they should go away.  Since their mission is to find out what has happened he finally admits them.  It turns out he is the only survivor of that group.  Everyone else, other than his wife, was killed by a creature that exists out in the open desert.  The ship they came on was destroyed when some of the colonists tried to escape on it.  His wife lived long enough to give birth to their daughter.  His daughter has grown to adulthood knowing only one other person – her father.
The father continues to let the ship’s captain know that he prefers his solitude.  He doesn’t trust the men of the crew around his daughter, either.  She is, of course, very beautiful and completely naïve when it comes to men, since she has never met any.
The captain needs to contact Earth to get further instructions.  Doing so will mean the ship will have to remain for several more days.  The father is not happy about it, but there is nothing he can do.  The crew sets up a defensive perimeter around the ship, but in the morning they find that parts of their ship have been damaged.  The father is even less happy now.  He lends them his robot to help with their repairs.  More things start to happen to the crew.  One scene shows a set of prints appearing one by one in the sand leading toward the ship.  Whatever it is, it is invisible to the human eye.  Is this what wiped out the colonists twenty years ago?
The captain of the ship continues to press the father.  He knows that there is more going on here than first meets the eye.  The father finally lets the captain in on discoveries he has made about a race of beings that lived on the planet long ago.  They had an advanced civilization that was destroyed almost overnight.  That is why he didn’t want anyone there; he wanted to keep the discovery to himself until he could complete all of his research.
Things start getting more and more dangerous for the crew, and even the father and daughter, who have survived fine until now.  How have they been able to survive anyway?  What is attacking the ship?  Is what is happening to the ship related to this long-dead race?  If so, then how?  All of these mysteries are solved and the final act has some tense moments in it that are really good.
The first thing that might play with your head when you watch this movie has nothing to do with the plot.  It’s that Leslie Nielsen plays the captain of the ship.  Yes, the same Leslie Nielsen who had a career revival later in life playing bumbling dolts in movies like Airplane and Naked Gun.  He was actually a tall, square-jawed man who always played the hero in his earlier roles.  It was those kinds of roles that the creators of Airplane wanted to spoof by using him in their movie.
The most enduring character to come out of Forbidden Planet might be the one that wasn’t even alive.  I am referring to the robot.  He was played by Robbie the Robot, who actually has his own IMDB page with his acting credits on it.  He is credited as “himself” in this movie.  He went on to appear in many TV shows, including Lost in Space.  When I saw this movie I actually recognized him from an episode of a 70s Saturday morning live action show I saw when I was a kid.  Because of Robby’s “acting” credits I now know that the name of the show was Ark II and that it was a 1976 episode titled (appropriately) “The Robot.”
Forbidden Planet is considered one of the all time classics of the genre.  It has been quite influential.  Gene Roddenberry said that it was a major inspiration for him when he created Star Trek.  Stop and think about how many episodes of the original show had plots about planets with few survivors on them, or long dead alien races.
As I mentioned at the top this movie can be viewed on two levels.  If you are just looking for a decent monster movie with some good suspense then go ahead and check this out.  If you are looking for a science fiction movie with some depth then you should definitely see this movie.  And if you don’t want to watch for either reason, but would like to see a couple of good mystery storylines then check this movie out.
Chip’s Rating: 4 out of 5 stars