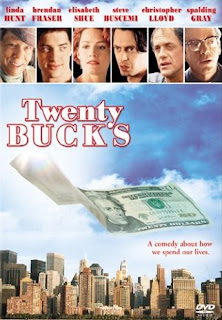 Twenty Bucks is one of those movies that uses the device of following an object around to present us with various slice of life stories.  In this case the object is a 20 dollar bill.  These kinds of movies were very popular many years ago because it allowed studios to use a number of stars in their system, but not tie them up for too long on filming.  Today these kinds of movies are few and far between.  (I’m going to do a category on them someday.)  It didn’t surprise me when I learned that the original script for this movie was written in 1935.  The son of the screenwriter found the script in 1990, heavily revised it, and got some producers on board.  In this case, we don’t lose sight of the various characters as the object moves on.  Instead, the stories interweave with each other.  The studio liked the concept so much they greenlit the picture without anybody being cast.
The fact that there was an independent movie that already had a budget ended up attracting a number of stars.  According to the filmmakers they actually had well known actors and actresses competing for roles.  They knew they needed some household names so they cast Christopher Lloyd (Back to the Future), Elisabeth Shue (Back to the Future Parts II and III), and singer Gladys Knight.  They then added indie movie mainstays Steve Buscemi and William H. Macy, who would team up three years later to do .  They cast up and coming actors/actresses such as Brendan Fraser (The Mummy), Melora Walters (Magnolia), Shohreh Aghdashloo (House of Sand and Fog), David Schwimmer (Friends), and Jeremy Piven (Entourage).  They included character actors Matt Frewer, Concetta Tomei, Ned Bellamy, Diane Baker, and Spalding Gray.  Finally, they cast Oscar winner Linda Hunt (The Year of Living Dangerously) to bookend the movie.
The movie opens with a Brinks truck driving through the streets of a city.  The soundtrack has various songs about money in it and this opening sequence is no different.  We then see a close up of a 20 dollar bill coming out of an ATM machine.  A woman takes it, but she is in a hurry and unknowingly drops it on the street.  A homeless woman (Hunt) snatches it up and thus begins the story.
The bill goes through many hands including a man about to be married (Fraser), a stripper/funeral director (Walters), a grandmother (Knight), two robbers (Lloyd and Buscemi), a cop (Macy), a young woman and her friend (Shue and Schwimmer), and many others.  I counted more than 20 different people who have the bill at some point, although some for only a short time.
For me the highlight of the various stories was the time that Lloyd and Buscemi spent on screen together.  Buscemi’s character is a small time conman, running ten dollar scams.  Lloyd’s character is an experienced thief who recruits him and starts to show him the benefit of robbing convenience stores in the suburbs (“more money and fewer cops”).  He also imparts some important life lessons.
I mentioned that the stories interweave.  You see some characters, like an Asian boy and a TV pitchman, before they ever come near the 20 dollar bill.  In other cases you get a look back in at a few characters, like Fraser’s and Shue’s, after they have passed the bill along.  Keep your eye out for the stripper to reappear as a funeral director.  When I first saw her I could tell it was the same actress, but I wasn’t sure if it was supposed to be the same person or if it was a twin sister.  According to the filmmakers it is the same person.  In the commentary for the movie Elisabeth Shue said she was jealous of Melora Walters because she wanted to play a part as out there as a stripper who becomes a funeral director.
Linda Hunt is another character who appears at various times in the film.  She reads the serial number off the bill and decides that it’s fate and that those will be the winning numbers in the upcoming lottery.  She keeps trying to buy a ticket, but something always happens to prevent it.  I figured that I knew what was going to happen at the end of the movie, and while I was somewhat correct, it ultimately ended up doing something else and I actually liked that better.
I recommend the movie Twenty Bucks to those people who like slice of life stories.  If you are looking for tons of action then this is not the movie for you.  Instead you end up spending time getting to know several people and their lives, in small increments.  I suggest you give this movie a try.
Chip’s Rating: 3 out of 5 stars
[Note – you can see all the Movies by Numbers, as well as get some hints on what’s to come, at this link.]