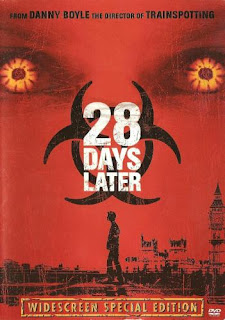 When 28 Days Later came out it re-energized the whole zombie movie genre.  It brought new life and ideas to a tired concept.  Now before a bunch of people have an apoplectic fit, technically there are no zombies in this movie; they are humans who have been infected with a “Rage” virus.  They are still alive and therefore are not zombies.  Because they are living humans, they also move very fast, unlike traditional zombies. Nevertheless, to everyone but purists this is a well liked zombie movie.
It was directed by Danny Boyle, who would go on to direct the Oscar winning 2008 film Slumdog Millionaire and the Oscar nominated 2010 film 127 Hours.  He had come to most people’s attention back in 1996 with the movie Trainspotting.
The movie opens with some animal activists trying to release some dangerous apes from a lab.  They are idiots and get attacked by the animals.  The movie then cuts to a man waking up in a hospital bed, with the words “28 Days Later” on the screen.  That is the only appearance of the title.  There are no opening credits.  (I wish more films would do this – just put the title up and start the movie.)
This man, named Jim (Cillian Murphy), has been in a coma.  He wakes up and there is no one around.  He can’t find any nurses, doctors, or anyone living.  He leaves the hospital and there is an eerie scene where he walks the deserted streets of .  I’m sure that for anyone familiar with these locations, it must have had even more of an impact.
He wanders into a church and from the balcony sees some movement down on the floor.  He calls out and some infected humans immediately see him.  He gives a great “oh shit!” reaction and starts to back away.  They immediately pursue him and their rage drives them to almost inhuman lengths to catch him.  He ends up being rescued by a man and a woman.  They take him to their safehouse and explain that a virus spread uncontrollably from the lab break in until most everyone was infected.  It gets spread by blood and saliva.  If infected blood gets in your eyes, nose, mouth, etc., or if you are bitten, the infection occurs in a matter of seconds.  The only recourse is to kill someone who is infected before they attack and infect you.  This gets driven home to Jim when their house gets attacked and the other man gets infected.  The woman, named Selena (Naomie Harris), immediately kills the man.  She tells Jim she will do the same to him, too, so he better stay clean.
Jim and Selena discover two other survivors: a father (Brendan Gleeson) and daughter (Megan Burns).  They have heard a recorded radio broadcast that the army has a base near where they have a solution to the Rage virus.  With supplies running low, they all agree to make the trip there.  They realize they may not find anyone there, but they don’t consider that there are worse things that can happen than finding no one.
Without giving any details, the ending of the movie was changed after test screenings gave it low marks.  This led to some people complaining about seeing a “Hollywoodized” movie and in a stroke of marketing genius the film company re-released the movie with the original ending on it to get people to go see it again.  The DVD has those two endings, plus a third on it.  I prefer the theatrical ending.
This movie was quite influential and it directly inspired the 2003 comedy Shaun of the Dead as an answer to it.  In addition, any number of movies and TV shows have since dealt with viruses wiping out humanity and making “zombies” in ways similar to this movie (i.e. I Am Legend, the Resident Evil movies, etc.)  Of course, 28 Days Later was not the first to feature a virus wiping out humanity, but its presentation of it was what was influential.  (Stephen King’s The Stand was an earlier example.)  King liked 28 Days Later so much he bought out an entire showing at a movie theater for his friends so they could all watch it together.
The movie is not perfect.  You have to suspend your disbelief quite a bit in some areas, such as a man in a coma surviving with no care for days/weeks and not getting attacked, too.  Selena wields a machete to kill, which is pretty much second worst only to a chainsaw if you don’t want to get any blood on you.
28 Days Later was followed by the sequel 28 Weeks Later in 2007, which was itself immediately followed by jokes about a third movie titled 28 Months Later.  The sequel, while entertaining in parts, is not as good as the first movie.  It does answer something left open to interpretation in the first movie; it’s only that was infected in 28 Days Later.
As a genre, Horror does not do much for me, and as a subgenre, zombie movies have been done to death (pun intended).  Because of this, a zombie movie has to be really good for me to recommend it to others, and 28 Days Later is one of those movies.  Even if you don’t like this genre, you should give this movie a try.
Chip’s Rating: 3 out of 5 stars
[Note – you can see all the Movies by Numbers, as well as get some hints on what’s to come, at this link.]
DVD                      Blu-ray