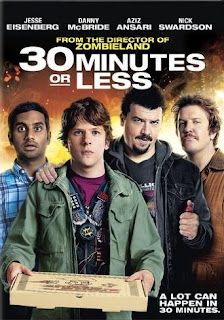 The movie 30 Minutes or Less is a comedy that is also trying to be a bit of a crime/heist movie.  It re-teams Jesse Eisenberg with his Zombieland director Ruben Fleischer.  When it came out it got mixed reviews and now that I’ve seen it I can tell why.  It’s a movie that will not work for everyone, and it also has angered a few people.  I’ll discuss why later in the post.  Despite these things, I still liked the movie enough to recommend it to others.
The movie stars Jesse Eisenberg (Zombieland) as Nick, a slacker who delivers pizzas for a living.  His best friend Chet is played by Aziz Ansari (Parks and Recreation), and Nick has feelings for Chet’s sister, Kate, played by Dilshad Vadsaria (Greek).  Chet and Nick have a falling out over this, and about Nick’s lack of goals.
We then meet lowlifes Dwayne (Danny McBride) and Travis (Nick Swardson) who are screwing around, blowing up watermelons for entertainment.  A little later, a stripper, played by Bianca Kajlich (Bring It On), hears Dwayne talk about all the money his father (Fred Ward) won in the lottery and how it will be his someday.  She suggests he hire someone to kill his dad and hints that when he has the money she will be all his.  She just happens to know a guy (Michael Pena) who will do it for $100,000.
Dwayne does have half a brain, so he and Travis try to figure out the best way to get the $100,000 without getting caught.  Dwayne figures they should rob a bank, but that they should blackmail someone else into doing it for them, so they don’t take the risk.  This is the same reason they are hiring a killer, instead of murdering his father themselves.  Travis comes up with the idea of rigging a bomb to the person to make them do what they want.  They are trying to figure out how to lure a person there when an ad for the pizza place Nick works for comes on the TV.
Nick shows up, they jump him, and knock him out.  He wakes up with the bomb strapped to him.  They explain he’s got nine hours until the bomb goes off and he has to come up with $100,000 before that.  They suggest he rob a bank for it.  They tell him they will be following him, and they will trigger the bomb by phone if he goes to the cops.  They then let him go.
He immediately goes to see Chet, who is a teacher.  Chet’s reaction: “You have a bomb strapped to you and your first reaction is to go to a building filled with small children?”
He and Chet make up and he convinces Chet to help him rob the bank.  From the trailer I had figured that this would be the major part of the movie.  It isn’t.  The bank robbery scenes are maybe 10-15 minutes and there is still a bunch of movie left after that.  That’s because things start to go wrong for everyone.
I mentioned that the movie may not work for all viewers.  That’s because it is trying to be both a comedy and a heist/crime movie.  Consequently, it is not as funny as an out and out comedy, nor is it filled with as much tension as a heist movie would be.  I still laughed some, and I still liked some of the crime stuff, but both were not as great as they could have been if they had concentrated on being one or the other.
I also mentioned that the movie had angered some people.  Perhaps the plot I described above sounded a little familiar?  A few years ago a real life pizza delivery guy held up a bank claiming that two men had strapped a bomb to him and made him do it.  He ended up getting killed when the bomb went off.  It turned out he was actually in on the scheme, though.  He just didn’t know they were going to put a real bomb on him.  The filmmakers have said they were “vaguely” aware of that event, but this movie is not based on it.  Yeah, right.
While I did get some good chuckles from the movie, not all of the humor worked.  Ansari was the weakest part of the movie.  He made me laugh a few times, but mostly he seems to think volume in delivering the lines makes up for lack of acting ability.  Fred Ward and Michael Pena did great jobs in the relatively small amount of screen time that they had, especially a scene they shared with each other.
One of the bigger laughs I had was a scene that follows the end credits, so let the movie run all the way to the end to see it.  There was also an in-joke about The Social Network when Eisenberg’s character tells someone that he doesn’t use that Facebook crap.
If you are looking for a decent comedy with a couple of heist/chase scenes in it, then give this movie a try.
Chip’s Rating: 3 out of 5 stars
[Note – you can see all the Movies by Numbers, as well as get some hints on what’s to come, at this link.]