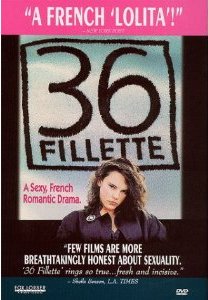 36 Fillette is an uncompromising look at one teenage girl’s journey to becoming a woman (in multiple senses of the phrase.)  It was written and directed by Catherine Breillat, who is known for doing controversial movies such as Romance (1999), with its explicit sex, and Fat Girl (2001), with its bizarre ending.  What makes 36 Fillette controversial is that the plot involves a fourteen year old girl who has decided to lose her virginity, and the actress playing her is also fourteen.
In addition to being the same age, Delphine Zentout is perfectly cast as Lili.  Her parents have brought her and her older brother with them to the shore for a vacation.  Lili is literally bursting out her dress, whose size of “36 Fillette” gives us the title of the movie.  It is the last dress size available for girls before moving into women’s sizes.  Lili is also bursting out of her own skin.  She is going crazy being cooped up with her family.  She and her brother are getting on each other’s nerves.  She’s going crazy with hormones and wants to go from 0 to 60 in regards to sex.  She is basically a force of nature that is out of control.
I mentioned that this movie was uncompromising.  Coming of age movies tend to be ones about first love, or heartbreak, or cutesy teens, or misunderstood kids who find their niche, or any number of other clichés.  This movie has none of those.  Lili is about as far from cutesy as you can get.  She is sullen, moody, quick to anger, impatient with her parents, runs hot and cold with men, etc.  To put it bluntly, she’s not presented as likeable, but rather as a typical teenager.
She has decided to lose her virginity.  Again, there are no American Pie clichés here.  She is very unsentimental about it, but when push comes to shove (no pun intended) she is indecisive about it.  When an opportunity occurs for her with a much older man, she suddenly changes her mind.  The next thing we know she changes her mind again.  This is also like a real teenager.
Yet another cliché is that for a girl, losing her virginity “is life changing”, “makes you a woman”, “is a moment of great importance”, “makes a woman realize she loves the man who took it from her”, or any number of other things.  You don’t see any of that sentimental stuff in this movie, either.
If you are looking for softcore pornography, though, you will be severely disappointed.  Lili gets into long discussions with men about various topics.  She isn’t hopping from bed to bed.  There is no soft focus camera work with a cheesy score when sex finally does occur.
You may have seen the phrase “A French Lolita” on the movie picture accompanying this post.  This is probably an example of a critic’s comment deliberately being taken out of context for the purpose of marketing.  My guess is that the critic was describing the lead character, not the movie.  This movie is nothing like the movie Lolita (1962).  However, the term “lolita” long ago became commonly used to mean a sexually-aware teenage girl, which is definitely an accurate description of Lili.
I should probably mention that Delphine Zentout has a nude scene in the movie.  Different sources list her age as either 14 or 16 at the time the film was made.  While there is nothing wrong about this, I realize that it makes some people uncomfortable. If it matters, the actress appeared to be noticeably older during the nude scene than at any other point in the film.  If I had to guess, Breillat shot the whole film then went back and shot the nude scene when the actress matured a little more.  I have no proof of this, though, so perhaps it is all in my head.
This was probably the biggest role of Zentout’s career.  I saw her several years later in a small role in the movie Farinelli (1994).  I can remember thinking how beautiful she had become, but also wondering what had happened to make her go from the lead in a movie to such a small role.  From her IMDB page she has continued to work right up to the present, much of it on French TV.
If you have seen some of Catherine Breillat’s other work, and would like to see where she was coming up with elements that she would use in her later films, then check this movie out.  You should also give this movie a try if you are sick to death of how unrealistically female sexuality, especially teen female sexuality, is presented in movies.  If you have to like the main character in order to like the movie, then this may not be the film for you.
Chip’s Rating: 3 out of 5 stars
[Note – you can see all the Movies by Numbers, as well as get some hints on what’s to come, at this link.]