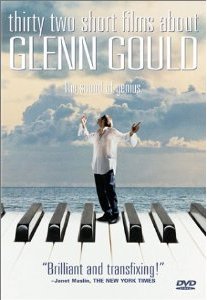 Glenn Gould was a classical pianist, composer, arranger, and radio documentarian.  He was from .  Unless you are a fan of classical music, you have probably not heard of him.  I would not have heard of him were it not for this movie.  This is not a traditional biographical movie, nor a traditional documentary.  It weaves together interviews with real people who knew Gould and performances by actor Colm Feore as Glenn Gould at various stages of his life.
The title is literal.  The movie is a set of 32 short sequences that look at various aspects of Gould’s life, focusing on his classical piano playing.  In the movie they state that Gould stopped performing concerts at the age of 32, so I figured the decision to make 32 short films was based on this.  Wikipedia, however, says that Gould stopped performing at 31, and IMDB says that the title comes from the piece of work most associated with Gould – Bach’s Goldberg Variations – which has 32 short pieces of music.
One thing you should expect from this movie is to hear a lot of Gould’s piano playing.  There was an early scene where Feore was acting out both older and younger versions of Gould, interviewing himself, while a piano piece was playing for the score.  It was so loud it was almost drowning out the dialogue and I was irritated because I wanted to hear the “interview.”  Just a few scenes later, though, the reverse occurred where they had Gould listening to a playback in a recording studio while the engineers just had some banal conversation about coffee, sometimes drowning out the music.  Later in the movie, they show how Gould chose to weave together multiple, simultaneous, conversations from people for his radio documentaries, so perhaps the filmmakers were copying that technique by weaving together Gould’s piano playing with the movie’s dialogue.
One thing you should not expect from this movie is to know much more about Glenn Gould when the movie is over than you did before it began.  It’s not a biography.  We learn he quit playing at 32, that he had eccentricities, that he took a lot of pills, etc.  None of these really get explored, though.  They are just presented, almost more for people that already know about them.
I wish that more of the 32 films had been interviews with people that knew him.  Those were the parts I liked the best.  Feore’s parts as Gould were the next best.  I’ve seen him in a number of things, most recently Thor (2011), but I didn’t realize his career went back this far.  The least liked parts for me were essentially arty music videos.  They would play very short sections of Gould’s performances and show various images on the screen.  For instance, one of them is titled “45 seconds and a chair”.  It consists of Feore sitting in a chair for 45 seconds while a piece of music is played.  That’s it.  The cynic in me says that they shot the other stuff, figured out how many “films” they were going to have, and shot the music videos as filler to bring the number up to the desired 32.  Of course, for classical piano fans these would probably be the best liked sections.
Even in the scenes acted by Feore they work in a lot of Gould’s playing, so expect to hear quite a bit of classical piano in the 98 minute running time.
If you hate classical music then you may want to skip this movie.  For everyone else, give this a try.  You might end up liking it.
Chip’s Rating: 3 out of 5 stars
[Note – you can see all the Movies by Numbers, as well as get some hints on what’s to come, at this link.]