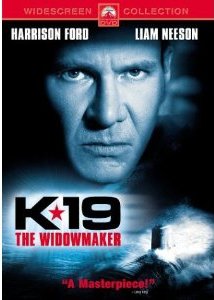 K-19: The Widowmaker is a submarine movie that is supposedly a true story.  In reality the filmmakers changed almost everything about it in order to pump up the tension and to make the stakes higher.  In fact, surviving crewmen of the K-19 sent an open letter to many involved in the movie complaining about the fictional parts of the story.  In any case, it is a movie, not a documentary, so the filmmakers can do whatever they want to pump up the plot.  While this is no Das Boot (1981) – the gold standard of submarine movies – it is also better than some others (which will remain nameless).

K-19 stars Harrison Ford as Captain Alexei Vostrikov and Liam Neeson as Executive Officer Mikhail Polenin.  The movie was directed by Katherine Bigelow, who would win the Oscar six years later for directing The Hurt Locker (2008).

It’s 1961 and the is launching its first ballistic missile nuclear submarine.  The Americans are ahead of them in developing this kind of weapon, so there is a lot of pressure to hurry things along.  A number of men died while building the boat and when it is launched the christening bottle doesn’t break – a traditional sign of bad luck.

When Vostrikov arrives to take command he shows he is not there to make friends.  He declares the nuclear reactor officer to be incompetent and orders him replaced.  The man who is sent is right out of the academy and has never even been to sea.  Vostrikov then finds fault with the crew, their discipline, and any number of other things.  He tells the officers that it is their fault that the crew is not up to his standards.  Polenin clashes with him some, but supports him.

For its initial run Vostrikov orders a daring maneuver.  He has the submarine descend to its maximum depth, then rise as fast as possible and punch through the polar ice so that they can test fire a dummy missile.  The crew thinks it is too dangerous, but when it proves successful it builds morale.  Vostrikov then orders the sub to head towards the American east coast.

Before they can get too far, though, a pipe carrying water coolant to the reactor bursts.  The control rods are inserted into the reactor to slow it down, but with no water to cool it the reactor will rapidly rise in temperature.  Here’s one place the filmmakers departed from science.  “All” that would happen in real life is that the reactor would melt down, melt through the bottom of the submarine, and sink to the ocean floor.  In the movie they declare that if the reactor is not cooled it will result in a thermonuclear explosion, which will in turn set off the nuclear warheads on the sub.

Vostrikov attempts to contact the U.S.S.R. for orders and assistance, but they find that their antenna has been damaged, probably as a result of the surfacing through the ice.  An American destroyer is nearby, but Vostrikov refuses to ask them for help.  He orders a makeshift system of piping to be built to cool the reactor.

This will require men to enter the reactor room in order to weld the pipes.  The boat has no real radiation suits on it; only chemical suits.  The men who enter the room will be killed by the radiation.  Vostrikov orders Polenin to have them do it anyway.  The stakes are now higher than just the lives of the men on the sub.  If they explode they will also take out the American destroyer and a Norwegian NATO base nearby.  With no way to contact the outside world it will appear as if the initiated a nuclear attack on the West and World War III will probably start.

Some of the men on the ship are near mutiny, though, and for them it is their own lives that they are most worried about.  The makeshift piping requires the door to the reactor room to be open and radiation is flooding the boat.  They want to get away from the radiation any way that they can, even if that mean scuttling the sub and asking the Americans for help.  Will Polenin continue to support his Captain, or will he follow the lead of his crew?

One thing I can tell you – in real life the sub was never known as “the widowmaker”.  After these events it did become known as “” to its surviving crew members, though.  Also in real life: in 1969 it collided with an American submarine and was severely damaged; and in 1972 it had a fire on board that killed 28 of the crew.

As I mentioned, if you can write off the scientific inaccuracies as artistic license, then there is some good tension in this movie.  The stakes are as high as they can be and you do not know how things are going to work out or who is going to survive.  I recommend you give this movie a try.