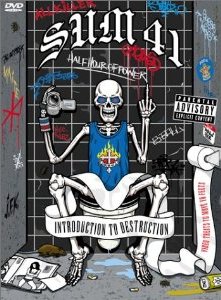 Sum 41’s DVD Introduction to Destruction captures the band early in their career.  In addition to a concert it includes a lot of footage the band shot themselves, both just goofing around and also trying to make “films”.  Sum 41 has changed in the years following this DVD release, so it gives you a look back at how they used to be.
Sum 41 came out of as a Green Day clone.  As their music progressed it became less punk pop and more alternative rock.  They also became more mature in the topics of their songs.  They are anything but mature on this early DVD.
I was a little disappointed by the fact that the concert was only 45 minutes long.  I suppose the band didn’t have enough music for a longer show yet.  It was recorded live at The Astoria in on September 28, 2001.  It is presented with a lot of quick edits, shots of the audience, flashing lights, and quick camera pans/zooms.  The band spent time between songs trying to banter with each other and with the audience in order to be funny.  Some humor worked and some didn’t (no, that’s not Tommy Lee on drums).  Here is the list of songs performed:
1.  Motivation
2.  Nothing on My Back
3.  Makes No Difference
4.  Rhythms
5.  In Too Deep
6.  All She’s Got
7.  Handle This
8.  Machine Gun
9.  Crazy Amanda Bunkface
10. It’s What We’re All About
11. Fat Lip
The performances of Motivation, In Too Deep, and Fat Lip include multi-angle options on the DVD.  At the time Makes No Difference and Fat Lip were the best known songs from the band.
The bulk of the content on the DVD is actually made up of non-concert material. There are five “Feature Films” that show the band back when they were on their first tour at the age of 16.  They had time to kill and they made up some quick scenarios and routines and filmed them.  There are also a set of Home Movies that show them doing various stupid things.  You can also listen to the band’s commentary on these.  The DVD then presents all the music videos that were available at the time, along with making of featurettes and commentary from the band.  In total, these extras provide more than an hour and a half of additional content.
I would say that this DVD would be best enjoyed by fans of the band and those people who are still in touch with their inner 16 year old idiot.  An example of some of the humor in the extra content is a band member dunking his hand in a toilet then shaking hands with everyone he meets. Another example involves rearranging letters on a sign to spell things like “anus invasion”.
There is plenty of R-rated language during the concert and in the extra footage.  There is also nudity in the extra footage, although it’s more the band getting naked than anyone else.  There are only a few female groupies shown.
If you like Sum 41 and want to see them in their early years, then give this DVD a try.  If you don’t like punk pop music, or are offended by juvenile humor then you will probably want to avoid this.
Chip’s Rating: 3 out of 5 stars
[Note – you can see all the Movies by Numbers, as well as get some hints on what’s to come, at this link.]