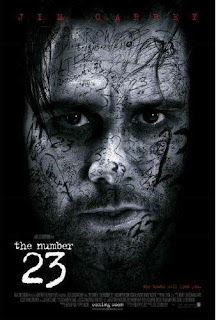 The movie The Number 23 is a bit hard to describe without giving too much away.  It is a psychological thriller starring Jim Carrey.  It is a conspiracy movie about the number 23.  It has sections that are homages to film noir.  It is a mystery movie, on multiple levels.  It is also a movie that may not work for everyone.  I will discuss why in this post.
Carrey plays dog catcher Walter Sparrow.  His wife is played by Virginia Madsen (Sideways), their son is played by Logan Lerman (3:10 to ), and Danny Huston (21 Grams) plays a family friend.  Lynn Collins (Wolverine) and Rhona Mitra (strong contender for hottest woman on the planet) are also in the movie, but to discuss their characters would give something away.  In addition to these main roles, some of the cast play a second role in scenes from a book that Carrey’s character is reading.  This sometimes makes it a little tough to figure out what is real and what isn’t.
In the movie Sparrow is late to pick up his wife, so while she is waiting she browses in a bookstore and buys something for her husband.  It is a book titled The Number 23: A Novel of Obsession and it is written by “Topsy Kretts”.  (Get it?  No?  Hint: say it out loud.)
Sparrow starts to read the book.  It is a novel about a detective named Fingerling.  Sparrow envisions himself in this role and we start to see scenes from the book as Sparrow is picturing them.  He envisions his wife as Fingerling’s lover and their friend as a police psychologist.  Sparrow starts to identify with the Fingerling character, who is obsessed with the number 23.  In his own life Sparrow starts noticing patterns of 23s.
The more he reads, the more he becomes convinced that this story is based on true events and the more he also becomes obsessed with the number 23.  He decides to track down the author, but this starts leading him in directions he isn’t prepared for.  His wife and friend get worried that he is starting to have a breakdown and from what we see in the movie, they may be right.  There is much more that occurs after this, but I’m going to stop there.
I mentioned that this movie may not work for everyone.  I am one of them.  So what am I doing recommending a movie that didn’t work for me?  I know that there are others who will love this movie because it will make them look at things a little differently.
Why didn’t it work for me?  First, I figured out what was going on not too far into the movie.  I’ve been told that I’m “not normal”, though, and that other people I watch these movies with don’t pick up on the same things.  I used to score high on pattern recognition tests (i.e. “what’s the next number in the sequence?”), so perhaps I pick up on patterns in movies, too.  If it helps put things in perspective on how obvious/not obvious this movie will be, I figured out The Usual Suspects (1995) and The Sixth Sense (1999) before the reveals were shown, but I did not figure out The Crying Game (1992).
Second, I was disappointed by some of the examples of where the number 23 supposedly keeps showing up.  It was inspired by the real life “23 Enigma”.  Yes, some of the things in the movie are real examples, but others consist of reversing the 2 and the 3 to get 32 and seeing 32s everywhere, or adding the 2 and the 3 to get 5 and seeing 5s everywhere.  Well, those are not the number 23 anymore.  Others consist of patterns like June 17th where June is the 6th month and 6 plus 17 equals 23.  Again, they aren’t a number 23 then.  As a bit of a numbers person myself, I found this something of a letdown.  You could end up doing this with any number you decided to start with.  A character in the movie even points this out to Sparrow.
Back to why people might like it, though.  Carrey does a good job playing it serious and playing duel roles of a family man descending into obsession and a detective on the trail of a murder case.  There are a number of red herrings that will keep some people thinking one thing, only to find out it’s something else entirely.  Anyone who likes mysteries will probably like the dual stories of the mystery within the book and the mystery of where the author of the book is.  Finally, if the movie is effective in convincing you of the patterns of numbers then something sinister appears to be afoot and perhaps it is the universe itself that is determining the fates of the characters.
If any of what I have written sounds like an interesting premise then give this movie a try.  If you think it sounds foolish then you may want to skip this movie.
Chip’s Rating: 3 out of 5 stars
[Note – you can see all the Movies by Numbers, as well as get some hints on what’s to come, at this link.]