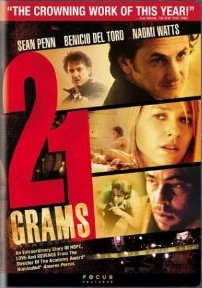 21 Grams was the first American movie from director Alejandro Gonzalez Inarritu.  He had previously directed Amores Perros (2000) to much critical acclaim.  21 Grams stars Sean Penn, Naomi Watts, and Benicio Del Toro in a set of three interconnecting stories, much like Amores Perros did.  In the case of 21 Grams, the story is shown in a non-linear fashion, so it does make the viewer pay more attention.  It is well worth the time.
I blew the mind of a co-worker when she recommended this movie to me.  I had not heard of it, but when she told me the title I said, “I suppose it’s based on the idea that a soul weighs 21 grams?”  She asked me how the hell I knew that.  I explained that this was one of history’s greatest examples of bad science attempting to prove religious beliefs.  In this case in the early 1900s a scientist weighed people before and after they died and supposedly found that they lost 21 grams after death – therefore souls weighed 21 grams.  In reality, none of his results were consistent, he didn’t follow scientific methods, and in the end he pretty much just made up the number.
The movie states it as a given fact.  In the end it really doesn’t matter since you get the concept of people’s souls with or without that.
Sean Penn plays Paul Rivers - a mathematician who is dying from heart failure.  He needs a heart transplant if he is going to live.  He has been trying to have a child with his wife (Charlotte Gainsbourg) and she is pushing for him to freeze some sperm in case he doesn’t survive.
Benicio Del Toro plays Jack Jordan - a reformed ex-con who has turned to Christianity to change his life.  He is now very religious, in the way only born again people can be.
Naomi Watts plays Cristina Peck - a former drug addict who has turned her life around, has married and now has two children.
The event that brings them all together is when kills Peck’s husband (Danny Huston) and children in a car accident.  This destroys Peck’s life and she ends up spiraling downward into drugs again.  Rivers ends up getting the heart of the husband transplanted into him.  turns himself in, but Peck refuses to press charges because it will not bring her family back.  feels he has to be punished, though, and ends up leaving his family and drifting back into his old ways.
Rivers refocuses on life and trying to start a family.  He finds out that his wife had gotten pregnant earlier in their marriage, though, and unbeknownst to him had an abortion.  To him this is a huge betrayal and it permanently severs him from his wife.  This leaves him just as lost as both Peck and Jordan.
Rivers becomes obsessed with finding out who his donor was.  He hires a private detective, who locates the donor and his surviving wife.  Against his better judgment Rivers strikes up a connection with Peck, who doesn’t know that he was the donor recipient.
There’s a lot more to the story after this, but I don’t want to spoil too much.  I will say that Rivers, Peck, and Jordan all have a lot further to go with each other before the movie is done.
I mentioned at the top that the story is told in a non-linear fashion.  This means we see the events before the crash, during the crash, and after the crash, but spread out through the movie.  You may see two people interacting after the crash, but not know yet how they got to that point.  A later scene in the movie will show you the events that led up to that meeting.  If you are the kind of person who likes to multitask while watching a movie, then you will probably find it hard to follow the plot.  You really need to just sit down and watch this movie.
Both and Del Toro received Oscar nominations.  is really the one that makes this movie great.  A lot of people feel that if she were nominated for this role in any year other than the same one where Charlize Theron was nominated for Monster (2003), then would have won.
21 Grams is a powerful drama.  It might have some things in it that are tough for you to watch (not as in gory, but as in emotionally).  It is not completely bleak, though.  There are positives to the story, too.  If you only really want to see comedies then you should probably skip this movie.  For everyone else, 21 Grams is highly recommended.
Chip’s Rating: 4 out of 5 stars
[Note – you can see all the Movies by Numbers, as well as get some hints on what’s to come, at this link.]