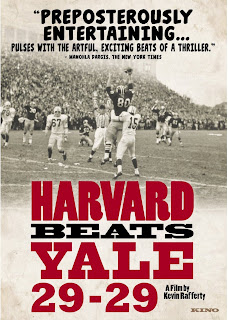 The title Harvard Beats Yale 29-29 is taken from a headline in the Harvard Crimson newspaper.  This movie is a documentary about one of the greatest college football games ever played, as well as many other events that were going on at the time.  The filmmakers got many of the players from the game to talk with them for this movie.  Among them is actor Tommy Lee Jones who was playing for Harvard.
I wouldn’t really call this a football movie.  You don’t need to know all the ins and outs of the sport to understand what is happening in the game.  Really all you need to know about American football is that you need to move the ball to the end of the field to score, and that you don’t want to give the ball up to the other team, unless you’ve scored or you can’t advance the ball anymore.
The film shows highlights from the November 23rd, 1968 game, but those are interwoven with interviews among at least a dozen different men who played in it.  The filmmakers don’t just ask them about the game, though.  They talk with one man who had served a tour of duty in .  Other men talk about the sexual revolution going on then and about the war protests going on then.  Cartoonist Gary Trudeau was attending Yale at the time and he created a comic strip that would go on to become Doonesbury.  The football character named B.D. was based on Yale’s quarterback Brian Dowling.
I mentioned that Tommy Lee Jones is among those interviewed.  Honestly, most of the other men seemed more excited to talk about the game than Jones did.  They did ask him about his college roommate – future Vice President Al Gore.  Jones tells them a story about Gore learning to play “” on the new touch tone phones that they got in their rooms.  (Let the credits roll at the end for a little bit for a callback to this.)
They talk with Yale player Ted Livingston, who was rooming with future President George W. Bush and they get him to tell them a story about Bush trying to tear down the goal posts after a win.  Another Yale player named Bobby Levin was dating a Vassar student by the name of Meryl Streep.  He talks about the two of them doing some protesting of the Vietnam War.
What makes this game so special?  Both teams were huge rivals and both were unbeaten going into this last game of the season.  Yale was nationally ranked (the Ivy League was still a power then) and was expected to beat Harvard quite easily, even though Harvard was also unbeaten.  The game was being played at Harvard’s stadium, so they had home field advantage.
Yale quickly went ahead and led Harvard 22-6 at halftime.  They had not had much of a hard time getting the lead and the Yale players already figured the game was over.  It was just a matter of going out and playing the second half.  Many of the Yale players talk about their overconfidence, while many of the Harvard players talk about how they had nothing to lose.
Yale still led 29-13 with only 42 seconds left in the game.  The Yale band was already playing songs, the Yale cheerleaders were firing off a little victory cannon, and the Yale fans were chanting that they were number one.  The only problem was that the game wasn’t over.  From the title you already know what happened.  Harvard managed to score 16 points in 42 seconds to tie the game.  There was no overtime in those days, so the game was over.
Even though the result is already known, the movie still manages to generate good tension.  How is Harvard going to pull this off?  There were some disputed calls late in the game and even forty years later you can tell some of the Yale players are still bothered by them.  The filmmakers use the game footage to great effect.
Because Yale was heavily favored to win, and because they were ahead by so much with the game almost over, that is why some people feel that Harvard “won” when the game ended in a tie.  Even some of the players, on both sides, subconsciously refer to it as a Harvard victory or a Yale loss.
Another thing you can see from this movie is how much the game has changed in forty years.  When players make a great play in the 1968 game, like scoring or getting possession of the ball, they are happy, but there is no chest thumping, running around, getting in other players’ faces, showing up the other team, dancing, or any of the other crap that goes on today when the same thing happens.  They do show a Yale player getting angry over what he feels is a bad call late in the game. (I agree with him.)  He turns his back on the ref and angrily walks away.  That’s it.  The man even apologizes forty years later and calls his behavior unacceptable.  Today, players would be all over the ref, screaming at him.
Unless you hate documentaries, you should give this movie a try.  It does a good job of using this game as a catalyst to communicate quite a bit about what life was like at the time.  I highly recommend it.
Chip’s Rating: 4 out of 5 stars
[Note – you can see all the Movies by Numbers, as well as get some hints on what’s to come, at this link.]