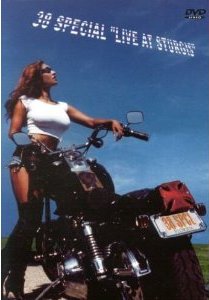 38 Special: Live at Sturgis excellently captures everything that the band 38 Special is about.  It features pretty much every familiar song of theirs without much filler.  There are no long diva moments, coordinated dance moves, or God help us, costume changes; it’s just straight ahead rock for 80 minutes.
For those of you not familiar with the band it was co-founded in 1974 by guitarist/vocalist Don Barnes and vocalist/guitarist Donnie Van Zant.  Donnie is the younger brother of Lynyrd Skynyrd’s original lead vocalist Ronnie Van Zant.  During the performance Donnie dedicates the song Rebel to Rebel to his brother.  38 Special has also been lumped into the “southern rock” label with Lynyrd Skynyrd.  The best known songs from 38 Special are the 1980’s Hold on Loosely, Caught Up in You, and If I’d Been the One.
For those of you who have never heard of Sturgis, this is .  When someone says “Sturgis”, though, they are more likely referring to the annual motorcycle rally that has been held there since 1938.  It is the largest in the country, with several hundred thousand people attending in some recent years.  A popular shirt reads, “Sturgis: the one week that justifies the 51 others.”  This performance from 38 Special was recorded there on August 12, 1999.
For a live performance, the sound on the DVD is excellent.  The band also plays the various instruments well and the two singers both still have their voices.  Founders Barnes and Van Zant are on stage, along with long time members Danny Chauncey (guitar), Bobby Capps (keyboards), LJ Junstrom (guitar), and new at the time Gary Moffatt (drums).  All six of these people are in the current (2011) lineup of 38 Special, so there is some serious commitment and longevity there.
Here are the songs that they perform:
1.  Rockin’ into the Night*
2.  20th Century Fox*
3.  Back Where You Belong*
4.  Wild-eyed Southern Boys*
5.  Fade to Blue (a new song at the time)*
6.  If I’d Been the One*
7.  Rebel to Rebel*
8.  Take ‘Em Out*
9.  Deja Voodoo*
10. Fantasy Girl*
11. A 10-12 minute medley of Back to Paradise, Somebody Like You, Teacher Teacher, Rough-housin’, Stone Cold Believer, Like No Other Night, Second Chance, and Chain Lightnin’
12. Caught Up in You*
13. Hold on Loosely (encore)*
14. Back in the (encore)
15. Travelin’ Band (encore)
The DVD also has an audio-only song Just One Girl that is on the Live at Sturgis CD that was released with this DVD performance.  The songs above marked with an asterisk are on the CD.
The camera work was also excellent.  They had multiple steadycams on stage, as well as cameras mounted looking in at the stage.  There’s no microsecond editing of camera angles, so you get good views of everything.  They also keep the focus on the band instead of the audience.  A lot of modern performers like to show the audience so everyone can see how awestruck they are by the performance.  38 Special didn’t bother with that crap.  When you do see the crowd they look kind of laidback, like they might have imbibed several cold ones before or during the concert (which is likely).  They are not crushed up against each other.  You can even see a few motorcycles scattered throughout the crowd.
If you were a fan of the band and would like to introduce your kids to them, you do not have to worry about avoiding this DVD.  Despite the reputations of both rock concerts and Sturgis, there are no women shown flashing the band during the performance.  It’s strictly PG.  (Note – after writing this I read a comment on Amazon claiming there was a flash, even giving the five second timestamp where it occurred.  I still had the disk from Netflix, so I popped it in.  It’s a far off shot of the crowd from the back.  It took me a good five minutes of searching and zooming in before I finally managed to pick her out.  She’s blocked by other people in the crowd; even on maximum zoom there’s nothing to see.  I hate to think how much time that commenter spent going through every second of crowd scenes, zooming in, until he - yes, I’m gender stereotyping - finally spotted this.)
If you were once a fan of the band, or only kind of remember the songs from when you were little, then this is an excellent way to bring back a lot of great music for you to listen to.  Unless you only listen to dance music then I highly recommend this performance.
Chip’s Rating: 4 out of 5 stars
[Note – you can see all the Movies by Numbers, as well as get some hints on what’s to come, at this link.]