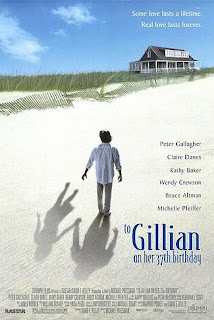 To Gillian on her 37th Birthday is based on the play by the same name.  It was adapted by David Kelley for the big screen as a vehicle for his wife Michelle Pfeiffer.  In the movie David Lewis (Peter Gallagher) takes long walks on the beach with his wife Gillian (Pfeiffer).  They talk about many things, bringing comfort to each other.  There’s only one problem: Gillian died two years ago.
David could not handle her death.  His grief has stayed with him the entire time.  He moved his daughter Rachel (Claire Danes) and himself to the and has retreated from life.  He is not delusional; he knows that his wife is dead.  He imagines her still with him, though, and this is where the conversations come in.  Unfortunately, he cannot see that in trying to keep his connection to his deceased wife he is losing his connection to his teenage daughter.
He invites Gillian’s sister Esther (Kathy Baker) and her husband Paul (Bruce Davison) to come visit for the weekend on the second anniversary of Gillian’s death.  In addition to her husband, Esther also brings a woman named Kevin (Wendy Crewson).  Esther hopes that Kevin will be able to distract David from Gillian.  This misguided attempt at matchmaking is just the first sign that Esther is going to be trouble.  One other key character is Cindy (Laurie Fortier) a much bolder teenage friend of Rachel’s.  She sets her sights on the married Paul.  Also look for Seth Green and Freddie Prinze, Jr. (in his screen debut) in small roles.
During the weekend Esther tries to get David to see that he is in danger of losing his daughter emotionally.  When that doesn’t work she threatens to take his daughter away physically.  Esther is about the most unlikable character there is, though, so her attempts at persuading/threatening David all go wrong.  In fact, this character created the biggest complaint with the movie.  Even though her message is the right one, David is so much more likable than her that it made viewers sympathize with David and some wanted him to continue to live in his own world with Gillian instead of facing the very real possibility of losing his daughter.  This is the kind of great moral quandary that David Kelley would bring to his TV writing, but it’s not the kind of thing that some people want to see in a movie.
Of all the performances, Claire Danes is the one that shines the brightest.  She plays the daughter who is also missing her mother in her own way, who likes her freedom, but also doesn’t want to lose her father.  In addition, she plays a somewhat shy teenage girl who is alternately shocked, impressed, and intrigued by the exploits, real or claimed, of her provocative friend Cindy.
I have read that this movie could be considered a version of Shakespeare’s The Tempest: a reclusive father and his daughter are isolated on an island where a “spirit” visits him and outsiders try to get him to reconnect with the rest of the world.
If having the message of the movie being delivered by an unlikable character is something that you cannot handle then you should avoid this movie.  You should also avoid it if you are looking for lots of fast action.  For everyone else, if it sounds interesting then give it a try.
Chip’s Rating: 3 out of 5 stars
[Note – you can see all the Movies by Numbers, as well as get some hints on what’s to come, at this link.]