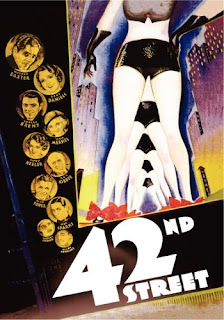 When 42nd Street came out Warner Brothers was close to bankruptcy from the effects of the Great Depression.  This movie not only saved the studio, but it is credited with single-handedly saving the movie musical genre.  It proved to be very popular with audiences and it received a Best Picture nomination.  The success of this movie led to Radio Pictures deciding to do Flying Down to (1933), which just happened to be the first pairing of Ginger Rogers and Fred Astaire.
It is easy for a modern audience to watch 42nd Street and think that it is all backstage stories that have been seen many times, but when the movie came out there were none of those.  You could say that this is the movie that created all those clichés that have been re-done and parodied ever since.
A rich, older industrialist (Guy Kibbee) agrees to finance a new show on Broadway starring Dorothy Brock (Bebe Daniels) if she will “do something” for him.  That something is becoming his lover.  She agrees to this despite still being in love with her former vaudeville partner (George Brent).  Julian Marsh (Warner Baxter), the best stage director there is, is hired to put on the show.  He takes the job despite serious health issues because he lost everything in the stock market crash.  As he says, “Did you ever try to cash reputation at the bank?”
We see them trying out a number of roles, both big and small.  We see the lives of three chorus girls – “Anytime” Annie, played by Ginger Rogers; , played by Una Merkel; and Peggy, played by Ruby Keeler.  is the girlfriend of the dance director (George E. Stone) and she gets him to agree to take the three of them.  In parallels to real life Ginger Rogers was the girlfriend of the original director Mervyn LeRoy, who had to drop out because of illness.  In addition, Ruby Keeler was married to the much older Al Jolson when she got this part, her screen debut.
Peggy is the naïve, young, small town girl who’s come to the big city to realize her dreams.  The other chorus girls trick her into making some foolish mistakes until she is befriended by Annie and .  The young male lead (Dick Powell) takes an immediate liking to her.
We see the director driving them very hard, never satisfied by their work.  He is getting more and more overwrought by their failure to live up to his vision.  You really do wonder if he’s going to survive to opening night.  You see various men try to take advantage of the innocent Peggy.  The fact that Dorothy is still seeing her old lover is discovered by the director and producers and they send a tough guy over to convince the lover to leave town.  They are worried that if her sugar daddy finds out, he will pull his money from the show and they would all lose their jobs.

They reach the night before they are going to open and Dorothy breaks her ankle.  It looks like they will have to cancel the opening.  The director is convinced to take a chance on the inexperienced chorus girl Peggy and move her up to the female lead.  During the morning and afternoon they frantically run her through all the things the lead has to do (learning lines, song lyrics, and dance moves).  What follows is one of the great quotes about show business as he sends her out onto the stage:
“Sawyer, you listen to me, and you listen hard. Two hundred people, two hundred jobs, two hundred thousand dollars, five weeks of grind and blood and sweat depend upon you. It's the lives of all these people who've worked with you. You've got to go on, and you've got to give and give and give. They've got to like you. Got to. Do you understand? You can't fall down. You can't because your future's in it, my future and everything all of us have is staked on you. All right, now I'm through, but you keep your feet on the ground and your head on those shoulders of yours and go out, and Sawyer, you're going out a youngster but you've got to come back a star!"


No pressure.
Speaking of quotes, there were a number of very suggestive lines in the movie.  The Hays Code for censoring movies had been passed, but it was not really being enforced yet.  Because of this we get lines such as “’Anytime’ Annie? – she only said ‘no’ once and then she didn’t even hear the question.”  (A chorus guy is uncomfortable with a chorus girl sitting on his lap) “What are you sitting on?”  “A flagpole, dearie, a flagpole.”
Then there were the lyrics to the song Shuffle Off To Buffalo.  It’s about getting married, but already planning to divorce the guy for all his money.  “Matrimony is baloney.  She’ll be wanting alimony in a year or so.”  “When she knows as much as we know, she’ll be on her way to , while he still has dough.”
They also show a scene within the stage musical where the male and female leads end up in a boarding room and pull down a shade with “asbestos” written on it.  For those who don’t know, asbestos was used as fireproofing before it was found to cause cancer.  The shade basically was saying that what was going to go on in that room between the two of them was going to be so hot that everyone outside would need to be protected from it.
There are also numerous shots of the women’s legs as they are practicing, as they are running up and down stairs, and there is even a camera dolly between the legs of the dancers during one of the big numbers.
I mentioned the song Shuffle Off To Buffalo.  Other big songs in the movie are You’re Getting To Be A Habit With Me and the title song.  We get to see around 20 minutes of the stage musical as it is being performed, including a big Busby Berkeley production of Young and Healthy.  was a man with no formal dance training, but who had incredible vision.  He went on to become the biggest choreographer in the history of musicals.
If you hate musicals, then you will probably hate this movie.  For everyone else give this movie a try and I think you’ll like it.
Chip’s Rating: 3 out of 5 stars
[Note – you can see all the Movies by Numbers, as well as get some hints on what’s to come, at this link.]